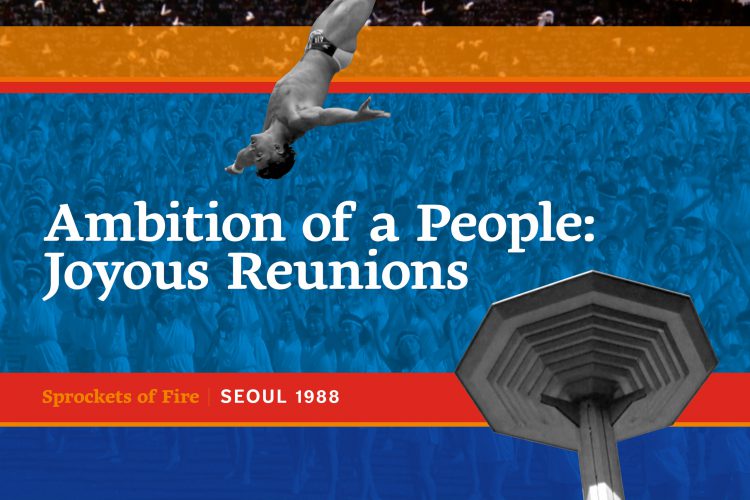 As the world prepares to reunite in Tokyo after a very difficult time, we’re honoring the most recent winter host, Pyeongchang, by taking a look at another momentous reunion of sporting nations: Seoul 1988. These Games took place at a crucial moment in 20th Century history—with the era-defining Cold War drawing to a close, though no one knew just how imminent that was.

After two successive heavily-boycotted Games at Moscow and Los Angeles, Seoul intended to help the world pivot toward peace and understanding. By 1988, South Korea itself had undergone major political change, so the Seoul Games were suddenly positioned to sit astride the fulcrum of international and local history.

The military dictatorship that ruled South Korea in the run-up to 1988 saw the Games as an opportunity to present a grand vision of “Harmony and Progress” to the world, while simultaneously reintroducing the modernizing country to the international scene. Unfortunately for them, the South Korean citizens had their own ideas of their future, and in June 1987 the wheels were set in motion for a return to democratic elections, which took place in December.

None of this changed aspirations for the Games, and the result, at least for our purposes, was a triad of official films. We are going to focus on two of them, which serve as an interesting contrast in methods and together provide a pretty comprehensive look at the Games. Both are in Korean with subtitles. (The third, Seoul 1988, is available for viewing at Olympic Channel.)

Bearing Witness: Beyond All Barriers

The Opening Ceremony at Seoul were the last to take place in daylight, and as is often the case, these ceremonies were intended to introduce the host nation’s history and cultural values to the world. The Closing Ceremony, in contrast, was held at night. The different timings seem to be a way of saying good morning and goodnight to the world visiting Korea. As these events were given great importance, a film was specifically created to highlight them. Beyond All Barriers, directed by Lee Ji-won, is a feature-length look at both ceremonies, with a short montage of sport in between.

There’s not an awful lot to say about it, really. Like Im Kwon-taek’s Hand in Hand below, it’s beautifully shot with punchy, saturated color in the daylight segments. The evening Closing Ceremony definitely suffers a bit from underexposure due to the limits of film & lighting at the time. A narrator helpfully explains everything that happens, priming the viewer for the use of some of the ceremony moments as thematic elements in Hand in Hand.

As a record of the ceremonies and testament to the enthusiasm with which Seoul welcomed the world, Beyond All Barriers succeeds. It’s not particularly exciting or engaging, but, in the tradition of some of the earlier Olympic films, it’s a solid record of what happened.

Im Kwon-taek has enjoyed a lengthy career in Korean film and has become one of the country’s most celebrated directors. His first major success was Mandala, released in 1981, and he eventually landed the duty of creating one of Seoul’s three films. A prolific director, he brought an enormous amount of ideas to his film!

The result feels a little unfocused, which is too bad, because we liked a lot of what Im did here. Perhaps it would have been more effective to present two films—Hand in Hand seems to be held back by an impulse to include as much as possible.

This film, named after the theme song of the Seoul Games, is organized in sections with connecting themes. The primary theme concerns war and politics, situating Seoul 1988 at the crossroads of history. The narrator mirrors the organizers’ intention to position the Games on the precipice of a new age: “a cultural experiment implemented at the turn of the 21st century.”

Im opens with archival footage of the Korean War, juxtaposed against the torch relay. In a brilliant move, the late Australian journalist Harry Gordon is interviewed in the stands before the Opening Ceremony. Gordon was an accomplished reporter and editor, and a war correspondent during the conflict. His first-hand reflections help support the thesis of the Games as turning point, signaling Korea’s recovery from suffering on its way to future prosperity, and a great opportunity for East and West to come together. To emphasize this point, grainy black-and-white footage of troops in the snow in 1954 suddenly cuts to a panorama of Jamsil Olympic Stadium, bursting with color under a cloudless sky.

The parade of nations takes place while the narrator discusses the 1980 and 1984 boycotts, listing the participating nations while they march in Seoul, once again part of the Olympic family. Nations joining for the first time are also spotlighted, and the overall effect really is one of reunion and shared humanity.

The infamous cauldron lighting is shown, and then a colorful flyover segues back to archival dogfight footage, which then cuts back to a military parachute display into the stadium. It’s a bit jarring but continues reinforcing the theme.

LW: I’m obviously a fan of military history, but that’s not why this was my favorite part. It was the most coherent part of the film … things devolved from here.

Combat in Venues of Peace

DW: At this point, just over 12 minutes into the film, Im transitions to athletic competition. Keeping with the theme, he has cleverly selected specific events under a headline of “From War to Peace”—javelin, shot put, discus, hammer throw, archery, fencing, and shooting. These seem to present a timeline of technological progression in combat, a fact sports fans can easily forget. Brief looks highlight the victors and their results. Thankfully, equal time and respect is given to male and female competitors, without any of the ogling or bias we often see in the earlier films.

A look at the tae kwon do demonstration at the Opening Ceremony follows, with a discussion of its roots as a non-combat martial art. It is another clever move that paints Seoul as a place of transition from conflict to peaceful competition. Next is the “Confrontation of Pride”—the men’s and women’s basketball competitions where the great geopolitical antagonists USA and Soviet Union alternated gold and bronze (with Yugoslavia taking silver in both).

The men’s semi-final matchup between the two is noted as the first in 16 years since the controversial 1972 gold medal game. Telephoto floor-level footage captures the action, conveying the tense, pressurized atmosphere. The Soviets are overjoyed in their victory, and the film gives credit for the win to Arvydas Sabonis, and tells the story of his treatment in the USA for an achilles injury. Again, Im returns to the peaceful theme of coming together. The Soviet flag and anthem at the medal ceremony crossfades into the opposite scene of the American flag and anthem for the women’s ceremony, portraying shared glory for both nations.

That pretty much wraps the central argument of this nearly two-hour film after 22 minutes. A few echoes of the theme are peppered throughout the rest, especially in the closing ceremony. Frankly, with a bit of padding the thesis could easily have carried a full hour-long film.

The Big Thing that Happened at Seoul

It is right about the 40-minute mark that Im takes on the one event that Seoul has become synonymous with: “The Dirtiest Race in History”—and doping. The segment is bracketed with humor, but the seriousness of the matter comes through. Im winks at the viewer with a look at false starts in swimming and track, then pivots to press interviews with Ben Johnson (CAN) and Carl Lewis (USA).

The men’s 100 meter final takes place in slow motion, with silence building to crowd noise as Johnson crosses the line. Johnson and Lewis’ times are shown, and the race is replayed at full speed and sound. Lewis mills about while Johnson is surrounded by press, and journalists on the scene call results in to their publications. During the medal ceremony, the narrator speaks:

For someone who isn’t familiar with the race, nothing really seems amiss until this statement. But a close eye sees a portrayal of injustice as Lewis watches Johnson be congratulated, and the media races ahead, reporting the results. This is the cost of doping: those who don’t cheat are robbed of an irreplaceable moment of satisfaction and recognition.

While they may receive the medal they should have been handed on the day, it will forever be tainted by the loss of that moment to someone who didn’t play by the rules. So here, through this scene and the setup of the media interview, Lewis is subtly portrayed as the victim.

Immediately after the narrator finishes this statement, the film segues to “Others Who Doped,” and three weightlifting medalists are shown. The irony of this quick transition, with hindsight, is that the dark shadow of suspicion didn’t cover Ben Johnson alone.

As mentioned, humor closes out this segment. “Others Who Struggle With Nature” is a quick look at failed weightlifting attempts and the gyrations of coaches trying to will their athletes to success.

LW: It freaked me out! I’m not a fan of watching people fail to lift hundreds of pounds over their head. I may have yelled at the TV.

DW: I winced for sure! But it was, at least, a clever mood-lightener, especially getting to see the remarkable performance of Naim Suleymanoglu (TUR).

Other Things that Happened at Seoul

The rest of the runtime is devoted to covering the remaining headline topic of Seoul 1988 and a collection of minor themes. I think we can put the latter under the umbrella of “Observations” as Im works to check the box of each sport contested. These range from the droll to the serious.

We must note here that we take issue with the characterization of cycling as a “dull sport.”

LW: Only someone who doesn’t get cycling would call it boring.

DW: A humorous segment on the cycling events features spectators playing ludicrously complex trumpets and kids yawning, and the implication is clear: this is boring! The velodrome events may be somewhat confusing, but we think cycling is fun and exciting. Im Kwon-taek, we object!

Fortunately, there are other moments that play better than the cycling insult. Inspired transitions abound: from wrestling and judo to rhythmic gymnastics; and synchronized swimming to water polo. For that matter, synchro is an example of a revelatory presentation of a sport that rarely gets any measurable screen time. The sheer physicality of the sport is displayed in a way that puts to shame all the usual focus on pageantry and costume.

The return of tennis and its landmark debut of professionals gets due notice. Table tennis follows, with excellent coverage that recalls the central thesis, mentioning the 1970s-era US-China ping-pong diplomacy.

I want to give credit to the director for what was clearly a thoughtful approach to this film. Despite striving to include virtually every sport, he managed to give intellectual time to all of it, finding ways to link disparate sports and tell a few memorable stories without the talking-head approach.

But I can’t help thinking it was too much for one single film, especially considering two other conventionally comprehensive films were produced. It somehow seems to lack continuity, even though the central theme is returned to repeatedly. That said, it is unquestionably an excellent documentary record of these Games, touching on every significant story and placing the whole event in a proper historical context.