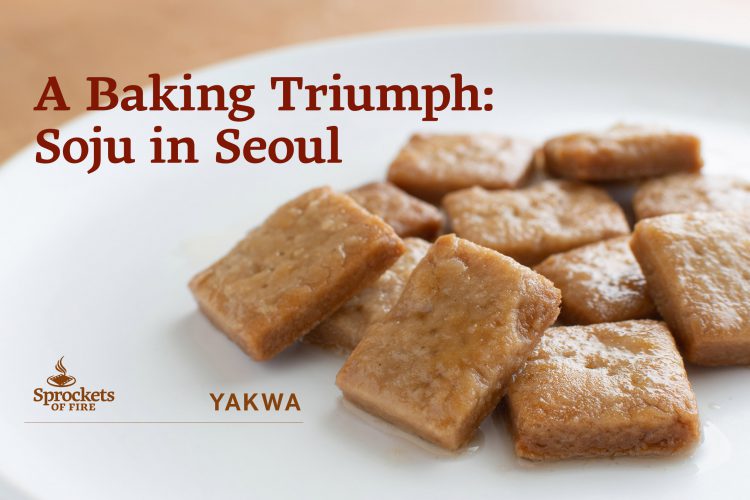 This week we’re in Korea! It’s been fun to watch the 1988 games along with the 2020 US Olympic trials and see the clear progression in so many sports. To go along with all of the Games viewing, we have a tasty Korean dessert and cake!

I definitely had a challenge finding a recipe for Korea, since I wanted to bake—rather than fry—and kept running into ingredient issues. (Yes, I could’ve solved this by planning in advance and shopping online, but … I didn’t do that.) Finally, I found this recipe for baked Yakwa and knew I had to try it. I couldn’t find rice syrup, though I know I’ve seen it locally previously, but thankfully our liquor store had soju available for curbside pickup.

This one was pretty simple for substitutions.

This recipe was a bit tricky, and I’m not sure if the gluten free flour played a role. It was really hard to get the dough to stick together with the recipe as listed. I ended up adding more of the wet ingredients in equal measure (around 1.5 T each) to get the dough to form enough to actually roll it. It just crumbled without the extra liquid and I only managed a dozen Yakwa after a whole lot of work. I had fewer issues with the crumbling once I added the extra liquid.

One other interesting note was the first batch of Yakwa came out much darker than the second batch and I was worried they’d taste burnt. Nope. They were actually the best to soak and eat, because they were so crisp. If you try this and they come out dark, don’t fret! They’ll still taste good.

DW: I made a point of trying both the first time around, because I wondered about the difference. They’re equally tasty!

LW: Last note! The recipe also calls for a lot of syrup, but I only made half of it. I did have to bake my Yakwa in two batches, so the smaller amount of syrup wasn’t an issue, since I was only soaking half the cookies at a time anyway. The cookies absorbed around half the liquid in total. I do wish I added more ginger, because while the syrup tasted good, you lose some of the ginger flavor when it’s absorbed into the Yakwa.

So how do they taste? So, so good. I fed the kiddo one early on and she got the biggest smile on her face. They’re soft and sweet on the outside, but still crispy on the inside. They’d be perfect with coffee. Sadly, they didn’t last long enough for us to find out.

DW: Sorry not sorry. Wait, with coffee? I guess I’m kind of sorry. Maybe we should try a recipe repechage for PyeongChang!

LW: This recipe came about because of our family love of the Food Network show Kids’ Baking Championship. We saw an olive oil cake made on the show and it looked excellent, so we thought we’d try one ourselves! Such a good idea. I found an orange olive oil cake recipe on Food Network and thought it only fitting to try out.

DW: It looks kind of like cornbread, but it’s actually not cornbread at all. It’s almost like a dessert impostor.

LW: This was a super simple recipe for substitutions!

Oh my gosh, how have I never made an olive oil cake before this?!? It was amazing! Light and fluffy with a hint of olive oil flavoring, which made it a bit more savory than a traditional lemon cake. I love cake recipes that don’t include frosting, since I haven’t experimented with dairy-free frosting yet. This cake didn’t need any additional topping and probably would have tasted odd with it. I’ll definitely be making more olive oil cakes!