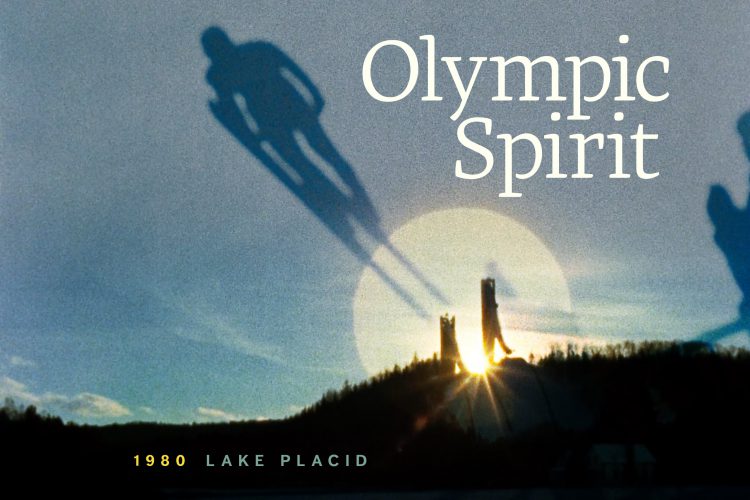 Host cities have generally interpreted Rule 48 of the Olympic Charter to mean they are required to produce a self-contained, fully-produced film, according to the conventions of the time. But American-hosted Games seem to have continually botched it in one way or another, with films either never materializing or getting outsourced as an afterthought. Even Los Angeles, home of Hollywood, needed a second try to get it right. So when it came time for the tiny village of Lake Placid to once again host the Olympic Winter Games in 1980, they farmed it out and called it a day.

The film that has been preserved and included in Criterion’s set—and thus effectively declared the “official” film—is Coca-Cola’s Olympic Spirit. This 27-minute romp was helmed by a familiar team and choreographs energetic onscreen action with a soundtrack that is unquestionably of its time.

Having been entrusted with the responsibility of creating a film, for Lake Placid Coca-Cola enlisted Tony Maylam, White Rock’s director. Maylam shared directing duties on Olympic Spirit with Drummond Challis (associate producer on White Rock) and there are some echoes of the earlier film.

This one, however, has no dialogue, and no athlete names or results are explicitly given. Most of the film is essentially a music video to Julian Brook tracks. There’s plenty of era-appropriate keyboard present.

After an “everyman” look at the torch relay, the camera dives into bobsleigh & luge runs, and it’s an extremely kinetic look at sliding, with the speed and rattle of the sleds palpable. This reminds us a bit of the 1976 segment where Jim Coburn takes a test run at Innsbruck. An original composition by Brook that sounds closely inspired by Elton John’s “Saturday Night is Alright for Fighting” keeps the pace high, complete with glissandos at well-matched moments in the footage.

The ski jump event feels really similar to White Rock. On-board footage with jumpers and an ethereal, almost melancholic sort of soundtrack recalls the sacred-music approach used previously. It works to present the jumpers as tragic, courageous heroes that nonetheless overcome the brutal danger of the event. Jan Holmlund (SWE) crashes suddenly as a discordant note is played—his fellow competitors look down solemnly, and then soldier on up the hill to their fates. Preceded and followed by slow-motion footage, this moment is shown at full speed, which makes it quite shocking.

A Dichotomy of Figure Skating

The figure skating at Lake Placid is covered in what is easily the most dated segment of the film. Brook’s “Monique,” a slow, dreamy ballad from his album Portrait, plays over slow-motion footage of four skaters: silver medalist Linda Fratianne (USA); Tina Riegel (FRG)—who, at 14 years old, competed in both singles & pairs; Denise Biellmann (SUI); and Danielle Rieder (SUI). It’s difficult to figure the rationale for the selections, but their skating is paired well with the pace of the music.

This section is bookended by a very small pigtailed girl skating on the frozen surface of Mirror Lake, presumably dreaming of her future self. It’s cute, but in retrospect—coupled with the song selection—it seems to diminish the athleticism of the Olympians themselves, and turns them into objects of longing rather than admiration.

LW: Just going to say I prefer films with dialogue. I’m not Don—I have no clue what’s happening unless there’s a voiceover.

DW: The scene on Mirror Lake fades to black and gold medalist Robin Cousins (GBR) appears, with a look at the dynamic disco segment of his long program. Again, an original composition from Brook carries the action, but it does feel at least reminiscent of the music from that part of Cousins’ program. This music is timed to the performance nearly as well as the impeccably choreographed actual program.

Brief looks are given to alpine skiing, cross-country, and speed skating. There’s a rhythm to the action in these events: alpine is fast and driving, while cross-country and speed skating are both comprised of measured and steady effort. Brook’s compositions are well-suited to the action here. Eric Heiden’s (USA) world record in the 10,000 gives way to Ingemar Stenmark’s (SWE) slalom victory, which is slowed down to work with the music. An unfortunate zoom-to-freeze-frame adds cheesy punctuation to an otherwise nice segment.

To this point we haven’t mentioned the elephant in the room, the thing Lake Placid is most remembered for: “The Miracle on Ice.” The unexpected way this is handled in the film is easily the highlight of the entire piece. It’s surprisingly refreshing to see the most-discussed event of a Games be the centerpiece of a film.

That freeze-frame on Stenmark we just mentioned? It’s held for a silent moment, and then a sudden smash cut jumps to a boisterous brass street band and Roni, the Lake Placid mascot, dancing in the stands at the ice hockey arena. This is so far from everything else in the film that it shakes the viewer and makes it clear that Something Is Happening!

Scenes of fans in the street fair outside the venue heighten anticipation, and a few selected looks at on-ice encounters between the Soviet and American players make it feel like a circus. But then the music falls away as Jack O’Callahan is dropped at the boards by Vasily Pervukhin, and the focus is squarely on the game, with plenty of crowd noise and “USA” chants.

The fast-paced action picks up with 14:19 to go in the third period, with the Soviets ahead 3-2. Within moments Mark Johnson puts the equalizer past Vladimir Myshkin. The already chippy game gets more so, and a parade of hits along the boards is showered with boos. A tense face-off yields to a bit of scrambling, and then Mike Eruzione takes his fateful shot.

The filmmakers do a wonderful job depicting the moment, choosing slow-motion footage from the goal line. Eruzione is hidden in the melee, but the puck is clearly visible flying past the frozen Myshkin into the net as the Americans glide past him, sticks in the air. Pandemonium breaks out and the game ends. A long shot of the shocked Soviets standing motionless on the far end quickly zooms out to the celebrating Americans on the near side.

It’s a great use of contrasts, and the fact that the whole third period is shown without any accompanying music is itself a contrast with the rest of the film. It’s the one moment where the viewer is given any direct sense of context or presence, and it’s extremely effective because of it.

LW: It was the best part of the film and the only one that definitely did not need a voiceover.

DW: Besides, we can all hear Al Michaels in our head asking if we believe in miracles!

Please Don’t Go, Not Just Yet

Brook’s “If You Change With The Seasons,” an upbeat but wistful composition, carries a closing montage with the only look at other women athletes. The little pigtailed girl reappears in the arena, leading a pack of kids. It recalls every montage that closes out every Olympic broadcast. It still feels good, the 1980 version of the excellent reel put together by London 2012’s organizers.

Financed by a sponsor, Olympic Spirit is a light little thing with a smaller ambition than Maylam & Challis’ prior outing. It lacks an overt narrative, it’s far shorter, it’s photographed less extravagantly, and the aspect ratio is less expansive (1.37:1 vs Panavision). There’s very little context (Lake Placid took place at one of the crucial moments of the Cold War for both sides), but it hardly matters since the hockey game carries most of that weight.

It’s a bit of a shame that there was no grand filmmaking project undertaken for these Games, which produced plenty of memorable moments. On the other hand, it’s a relief to see how restrained the Coca-Cola presence is in the final product. Aside from one obligatory shot of a Coke machine on the street before the hockey match, any other sightings of branding (Roni’s hat, for instance) are easily missable.

While we certainly like to see a bit more storytelling, this film constrains itself in a way that feels suited to the intentionally smaller scope of the Games it documents. It’s a quick watch but is full of tightly edited sequences that make an effective time capsule with a satisfying finish.

Since we’re covering a sponsor-financed film, we thought it would be fair game to let you see a couple of pre-Games shorts we recently discovered. These were produced by New York Telephone Company, a subsidiary of AT&T. The company provided telecommunications support to the organizing committee.

Lake Placid did not complete an official film the first time it hosted in 1932, but as noted in the official report from those Games, plenty of newsreel footage was created. Here’s one of them, which features mass-start speed skating, Sonja Henie, and dog-sled racing:

Rule 48 of the 1974 version of the Olympic Charter states, among other things:

The Organizing Committee will take the necessary steps to ensure that the Games are recorded on a comprehensive film, including at least shots of the finals in each event and in each sport.

From the official report on the Lake Placid Games, p. 123:

The Organizing Committee authorized two of its sponsors, The Coca-Cola Company and K-2 Corporation, to produce films of the Games. The Coca-Cola film is oriented for general viewings before civic and community groups, i.e., non-paying audiences, while the K-2 film primarily serves K-2’s specific advertising and promotional purposes.

Free Wheelin’ Films, Ltd. was granted the right to produce non-theatrical films for corporate sponsors, to be shown for in-house motivational purposes as well as to civic and community groups. Minimal revenues were generated from the sale of these film rights.

We are reaching out to Freewheelin’ Films regarding their efforts at Lake Placid. We’ll be sure to follow up on it if we’re able to learn anything!

Thank you to Dr. Chris Mitchell for assistance in identifying the music that makes up the soundtrack to this film. Dr. Mitchell helped us with digitizing and restoring a copy of the out-of-print Julian Brook LP Portrait that we managed to track down.