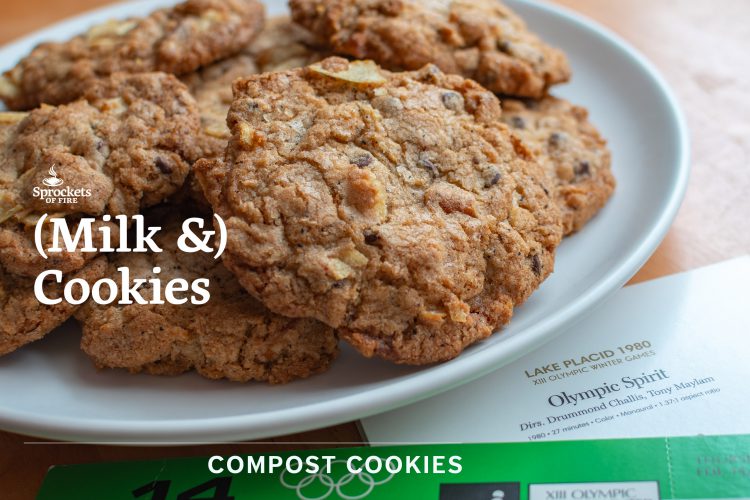 It’s been a bit—sorry about that! It turns out launching a project you’ve been working on for a year can be … intense. But we’re back!

Can a cookie dough change your entire perception of what a cookie can be? I would have said no before today. I would’ve been wrong. Our first recipe for Lake Placid just blew my mind, and the second didn’t disappoint either. Hope everyone’s ready for cookies, because we’ve got some coming your way!

We spent some time last winter (aka two decades ago) in New York City, so I thought it would be fun to see if there were any good recipes from some of the fantastic bakeries in the city. There were lots to choose from, though many that would be hard to replicate. (I still haven’t figured out how to make sweetened condensed milk.) When I came across Milk Bar’s Compost Cookies, I knew I had to try them out.

Wow. The cookie dough alone was just mind blowing. How had I never thought to put coffee grounds in dough before? It made the cookies a completely different experience. It was also super fun to fold it chocolate, pretzels, and potato chips and then try to scoop the dough into balls. Thankfully Don got me a scoop to make cupcakes with a few years ago, which was the perfect size.

DW: Little did we know how useful it would be! Well, I guess you probably knew.

LW: That’s not even half the cookies. Also they are each larger than my hand, which I have not determined to be the appropriate size for a cookie.

This one got a little tricky for substitutions.

There are definitely a couple of things that tripped me up. We don’t have glucose on hand and I didn’t see it at the grocery store. I knew this meant the cookies would be a bit drier, but I was willing to take the risk. There was no way for me to figure out the graham crust, as I don’t have powdered non-dairy milk on hand. While I’m sure the cookies will be better with those two things, they were still amazing without them.

LW: I’m going to admit I did test out the cookie dough here, which I know is risky. It was totally worth it. The coffee ground in the cookie dough were just next level. Also: don’t eat the cookie dough. (That feels like a disclaimer I should make.) The dough was refrigerated before baking and that of course made the cookies super crispy and delicious. You can’t taste the coffee specifically once the dough is baked, which I found surprising. It blends into the background and works well with the caramelized goodness of these cookies.

The recipe recommends kettle style potato chips. I didn’t notice that until after I went to the store, and so I used thinner chips. You should use kettle chips—the potato chips have melded into our cookies and got less crunchy than intended. Also it says to press the cookies down before chilling. Do it. It was wicked hard to press them once they were cold.

I’m not going to try to convince you to make these cookies, I’m just going to tell you to do it. They’re amazing. Now I’m going to eat another one.

DW: Too late. I finished them.

LW: Biscotti time! Somehow I have never made biscotti, and when I saw Vegan Richa’s new recipe for churro biscotti pop up at the end of last year, I knew I had to change that.

LW: Wow. These were absolutely delicious and full of cinnamon goodness. Perfect for dunking (though I should have baked them longer) and paired well with coffee.

The dough was simple to bring together and it was fun to shape it. I’ve watched biscotti made on The Great British Bake Off, so I knew I had to bake the dough, let it cool, slice into cookies, and bake again. It seems like a lot of work, but it honestly didn’t feel that hard. I’m definitely going to experiment with other flavor combinations in the future.

The cinnamon flavor was so perfect with coffee. I also love how well biscotti holds up over time. They were on the counter for a few weeks and still just as good as the first day. Definitely try this recipe out if you’re looking for a good biscotti recipe!