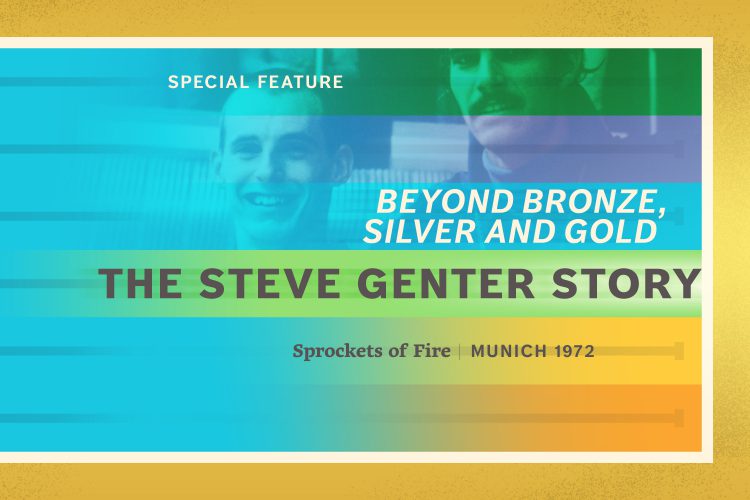 We recently had the opportunity to screen the debut episode of 1976 Olympian John MacLeod’s upcoming series on untold Olympic stories, Beyond Bronze, Silver and Gold. “Conviction” is focused on Steve Genter, an American swimmer at Munich 1972. Since we were in the middle of watching and writing about Visions of Eight, we thought the timing was great.

The premise of the series is to focus on Olympians who weren’t necessarily the headliners, but have compelling stories to tell nonetheless. Win or lose, every Olympian is, by definition, more accomplished in their field than the vast majority of humans. They each experienced a journey full of effort and emotion to reach the field of play and compete. Press coverage generally focuses on the victors, but what about everybody else?

In Visions of Eight, Claude Lelouch dedicated his segment to observing and recognizing those efforts, but didn’t tell us anything else about them. One might wonder about the guys who finished second to Mark Spitz. Who were they? Well, in the 200-meter freestyle, it was Steve Genter. And boy, does he have a tale to tell.

The gang’s all here

MacLeod gathers all the primary sources to tell the full story, with a narrator to help us along. Genter is front and center, joined by his legendary coach Jim Montrella, and longtime friend, high school teammate, and active masters swimmer Mindy Dougherty. Mark Spitz and US teammate Rick DeMont also appear.

Each speaker is engaging, lively and full of insight, and the interviews are intercut in a way that seamlessly propels the narrative forward. Archival footage and photography provides both specific visuals and background context. It feels like a much more in-depth evolution of Bud Greenspan’s athlete-focused approach. While Greenspan’s work is beloved, it could at times feel a little cold and procedural. MacLeod has taken that formula and expanded it beyond the details of competition. Here there’s new warmth and an insight that feels won from his own Olympic experience.

Before getting to Munich the film introduces Genter and his childhood in Southern California. Genter, Montrella, and Dougherty combine to tell the story of a classic UCLA-USC swim meet. Genter famously yelled “goodbye” to his competitors during a race on his way to a dominating win, spurring UCLA on to its first-ever victory over USC. This fun moment establishes his position as a rival to the eventual star of Munich, Mark Spitz.

The core of Genter’s story occurs, of course, in Munich. During training he suffered a collapsed lung and went through an ordeal of treatment to stabilize his condition. Importantly, this emergency surgery was completed without sedatives to stay clear of doping violations, and Genter managed to get back to the pool in time for his races. The incredible story reminded us of the gutsy determination of Petra Majdič, the Slovenian cross-country skier who contested all four rounds of the sprint event at Vancouver with a punctured lung and four broken ribs.

If I didn’t get any medal at all, it was worth it.

—Steve Genter, on the opportunity to swim at the Olympic Games

Genter’s suffering was no less harrowing, and he came through it displaying the sort of courage most of us can only dream of. Leading Spitz at the last turn in the 200 free, his stitches broke and he blacked out. He faded in the race but managed to hold off Werner Lampe (FRG) for silver, left with no memory of the final excruciating 50 meters. The painful story is made tangible by Genter’s frank delivery and MacLeod’s editing.

The Tragedy of Rick DeMont

The film pivots to the Munich saga of Rick DeMont, a young and promising teammate who suffered from asthma. DeMont won the 400 meter freestyle, with Genter finishing third.

In an ironic twist of the doping issue alluded to in Genter’s surgery tale, DeMont failed a drug test and was stripped of his medal. He had taken a medication called Marax to control an asthma attack the night before the final. He had never hidden his use of Marax and had declared it properly on the forms provided for the purpose. The US team doctors, however, dropped the ball and did not investigate the ingredients. One of these was ephedrine, a banned stimulant. However, the US team took no responsibility at the time, the IOC refused to budge, and DeMont was stripped of his gold medal.

The inclusion of what at first feels like a bonus story serves to further flesh out Genter’s character. He refused to return the bronze medal from DeMont’s race in exchange for the silver medal he is now officially credited with. The film scores an unexpected revelation: the little-known cost of Genter’s honorable act was his eligibility to ever swim at a Games again. He overcame physical obstacles only to be presented with an equally challenging moral dilemma, a true profile in courage in the very best sense. DeMont is deeply grateful for Genter’s sportsmanship and support, saying “it’s nice to know that there’s still people out there like that.”

Can we have some more, please?

This is one of those Olympic stories that can all too often be lost to time and overshadowed by more well-known triumphs. It’s what excites us so much about what MacLeod is trying to do with his series. So often a particular Games is identified with and known for just the headliners: Spitz, Carl Lewis, Usain Bolt, etc.

In the sports documentary genre we have become accustomed to either stories of incandescent glory or sordid tales of cheating and failure. Focused features about other athletes can help us learn so much more about this incredible event we love. “Conviction” is infused with humanity, touches of humor, and built on a foundation of courageous optimism. It’s an approach we think is overdue and very welcome.

Without films like this, how would we remember—or even learn—that an athlete’s journey involved not only physical struggle, but stark moments of moral decision? Sport is so much more than the execution of physicality, and in this age of analytics we need these reminders.

MacLeod is currently seeking distribution avenues for his docuseries, with a second episode already in production. We are definitely hoping for more of them and hope they can be made. Based on the debut episode we see outstanding potential in his point of view.

If you have thoughts about a good fit for these stories, John would love to hear them. To pass them along, or to inquire about a screening, please contact him via any of these platforms:

John MacLeod was a member of the 1976 Canadian Water Polo team, competing at the XXI Olympic Games in Montréal.

SEE THE TRAILER FOR “CONVICTION”