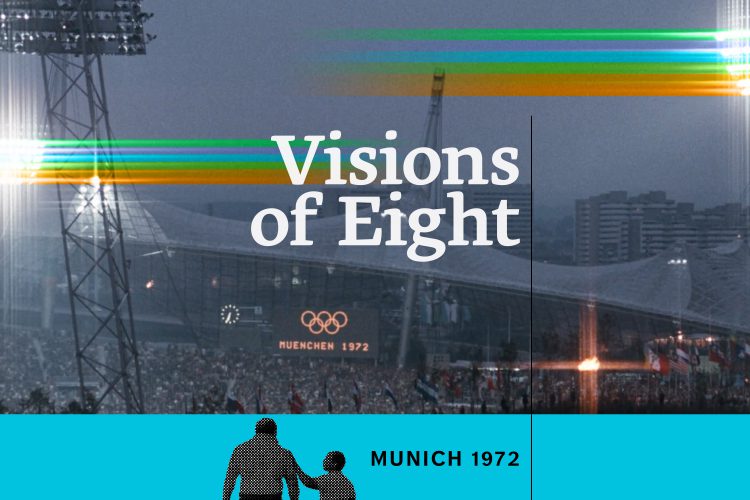 For most people, the Games of the XX Olympiad at Munich 1972 are remembered for three things: the wretched attack on Israeli athletes; Mark Spitz’s seven gold medals; and Olga Korbut’s back somersault on the balance beam. But so much more happened at these “Cheerful Games,” intended to welcome the world to a new Germany, its recent dark history left in the past. Visions of Eight is a unique, ambitious look at some of these other, less-remembered stories.

Executive Producer David Wolper selected ten directors to assemble disparate short films based on their own interests. For different reasons, two were left in the cutting room, and so we have eight interesting stories to enjoy.

Like the various events that make up a Games, some of these segments are more successful than others. They each capture a different perspective on what it means to compete at the highest level.

The signal that this film will be different is very clear right from the beginning, with a fairly ominous look at a sunrise, then the surface of the sun, flares and all. This is weird, but the connection is made quickly to the flame of Munich’s torch. The directors are introduced as the torchbearers make their way to the cauldron, opening the Games.

Fittingly, Ozerov opens the film looking at preparation and concentration, the process and tension of getting ready. He sees a unity of purpose among athletes in their various sports. His short, five-minute piece also alludes briefly to the preparation of the Games themselves, foreshadowing some of the following segments. But his focus is primarily on humanizing unnamed athletes of all sports as they arrive, train, take communion in the Village’s chapel, and warm up in their arenas. An odd synthesized audio track builds in pitch and anticipation, and the final moments of tension release in a furious montage of athletic action.

Zetterling delivers one of the most entertaining pieces in the entire film, taking us into the weightlifting competition. Her interest is obsession, and this is a sport rife with singular obsession and focus. Her segment opens with a shot from a rooftop of bantamweight Precious McKenzie (GBR) practicing alone in a Village plaza, without weights, over and over. It sets the tone for what follows, an amusing look at lifters training prior to competition.

LW: This was a fun piece for me to watch, as I’ve been weightlifting a lot more recently. It was fun to see an historical look at the sport.

DW: Against this Zetterling juxtaposes seriousness and playfulness as a military brass band rehearses in the venue. Suddenly an echoing German voice begins listing food requirements for the Village, with the implication that these enormous lifters are responsible for the quantities. As the band plays, we see a rhythmic procession of food preparation, computer printouts, and straining lifters. It’s a clever way for Zetterling to lay bare all that is required to support the lifters’ obsession.

The super-heavyweight competition plays out sans commentary, but it’s easy to follow due to Zetterling’s expert editing. The main protagonist is Terry Perdue (GBR), who stalks around the platform, staring at the bar for his final lift. He approaches the bar twice, and we are not surprised when he cannot lift it. Immediately Vasily Alekseyev (URS) completes his Olympic record lift, taking the gold.

LW: Honestly, sometimes I stalk around like Perdue before my lifts! With fewer spectators, of course, since I’m in our basement.

DW: Luckily you don’t follow up that stalking with destroying the basement, which is what happens next in the film: in a burst of clanging and crashing, the venue is broken down! Five soldiers lift the loaded bar that one man just lifted on his own. The giant Perdue, now dressed in street clothes, dwarfs McKenzie comically as they leave together, their work done.

DW: Penn’s look at the pole vaulters is a challenging but ultimately rewarding piece. It’s slow, takes almost two minutes to resolve from completely out-of-focus to sharp, and is largely silent, punctuated with crowd noise. And yet it tells the story of the competition well. Vaulters succeed and fail, the extreme slow-motion footage showing every ounce of effort they make in their attempts.

Steve Smith (USA) throws a temper tantrum, along with the bar and pole. At the conclusion of the event Bob Seagren (USA), one of several subject to a controversial pole confiscation saga, sarcastically hands his replacement pole back to an official (IAAF President Adriaan Paulen, as noted by Olympedia). There are beautifully composed moments—Wolfgang Nordwig (GDR) delicately letting go of the pole—and plenty of raw emotion—Jan Johnson‘s (USA) anguish after crashing out of the competition. It’s a fascinating way to tell the story of a sporting event without a single word.

When this segment opens, Pfleghar notes he wants to acknowledge the contributions of the record number of women athletes competing at Munich. Great! Alas, it immediately launches into a pretty dated “look” at, well, the looks of the athletes in various sports, complete with a pretty condescending soundtrack. The camera uncomfortably ogles its way through the Games.

LW: We all know my thoughts on this piece.

DW: But action breaks out, and it’s thankfully presented as legitimate athletics. Heide Rosendahl and Heidi Schüller duke it out for the West German fans in the long jump. Ulrike Meyfarth (FRG) takes her first of two career golds in high jump here (she defeated Sara Simeoni 12 years later in LA). And Soviet gymnast Lyudmila Turishcheva gets a respectful spotlight on her uneven bars routine.

Ichikawa, director of the fabulous Tokyo Olympiad, envisioned the 100-meter dash as a metaphor for “modern mechanized man,” all power and speed and focus. The segment is mostly slow-motion footage of individual runners making their way down the track. Perhaps in 1973 it was profound, but it feels somewhat mundane now. (Roger Ebert, reviewing it then, seems noncommittal.) Having just watched Penn’s piece deploy similar techniques much more successfully, Ichikawa’s attempt falls flat. At the very end, the entire final is shown from multiple angles with international announcer calls. It provides welcome perspective, but it’s not enough to salvage the entire segment.

The grueling decathlon is often presented with gravitas and reverence, highlighting the twists and turns of the competition and the dedication and grit of the competitors.

On the other hand, Milos Forman, well-known for his humor, decided to do something completely different with it. The result is the most joyful segment in this film. Every event is shown, but interspersed with Bavarian folk music and perfectly timed orchestral arrangements from Munich’s extensive cultural program. It takes pure directorial bravado to play one of the most serious events as a light comedy. It’s silly and fun but it contains such attention to the details of each event that Forman’s respect for the athletes comes through all the same. Just as much attention is given to the officials that make the competition possible and the formalities of their role get put through the same lighthearted filter.

There are so many clever moments of surprise juxtaposition and slightly askew accompaniments that I could write an essay just on this one piece! It’s absolutely delightful. Some highlights:

“Loser” is a strange word to use when describing an elite athlete, by definition an expert in their field. Nevertheless, the Games are a competition, and most do not win their events. Lelouch chose to take a look at those who were unable to reach the pinnacle. His approach is not subtle, but a blunt object, with accidents, injuries, and the literal agony of defeat. Juan Francisco Rodríguez (ESP) melts down at the end of his quarterfinal boxing match and the swimmers left in Mark Spitz’s wake despair. Boxers crumple. A cyclist suddenly crashes on the track at full speed. Equestrian riders fall from their mounts, desperately avoiding hooves, and an Iranian wrestler soldiers on through knee injuries. In the end at least, after this gluttony, Lelouch returns to the human touch, showing the wrestler helped off the mat by the Soviet who inflicted his suffering. It’s a brutal 15 minutes.

The final segment of the film is concerned with the men’s marathon. Here Schlesinger follows his compatriot Ronald Hill in training and through the brain-twisting experience of running an elite marathon.

But first we finally get a glimpse of the elephant in the room, the tragedy of the Israeli athletes. The story is told through un-narrated bits of film and newspaper clippings. In his apartment in the Village, Hill reflects on why he’s there and how he must ignore what happened in order to be ready for his event. It’s brief, but it’s evocative of what every athlete must have gone through when Avery Brundage declared the Games would go on.

Schlesinger pivots back to athletics, and through showing preparations for the race and atmosphere around it, the sense of the event’s magnitude is clear. The key innovation of this segment is Schlesinger’s investigation of the distance runner’s wandering mind. As Hill progresses, the landscape transitions into his home training roads, evoking a daydream. A beer is poured, women in a solarium watch, Hill greets his son. A runner’s mind may drift, but it will return to the race. Hill passes Seppo Nikkari (FIN), pointedly looking into his eyes to take his measure.

All the obligatory marathon shots are here: an exhausted runner carted off into an ambulance, the final runner finishing in darkness (Maurice Charlotin, HAI). The segment wraps up with a brief look at the memorial service held at the main stadium on September 6, the joy of the closing ceremony, and Ronald Hill, back on another training run, sitting down on his front steps.

It’s really refreshing to see specific points of view in a sports film. Especially today, when so much focus is put on statistics and analytics and win-loss records. We are so accustomed to seeing and thinking about “what happened” at a sporting event, especially when it comes to Olympic films.

The best moments are the unexpected ones in Zetterling’s and Forman’s pieces. Schlesinger’s inner look at distance running is worthy as well. These segments succeed especially because they look beyond the results.

By now we know the feats are extraordinary and the achievements remarkable. What we see less of are attempts to discuss or convey the meaning of the events. This film puts the focus on meaning and interpretation, rather than recording and retelling, and benefits from it.

Visions of Eight is currently available to watch at the Olympic Channel. Don’t miss it!

We also want to note that the upcoming Beyond Bronze, Silver and Gold documentary series from John MacLeod features American Munich 1972 swimmers Steve Genter and Rick DeMont in its debut episode. We had the opportunity to screen it immediately after watching Visions of Eight and found it fascinating. We will be writing about this excellent new effort soon and encourage you to check out the trailer!

LISTEN TO THE SOUNDTRACK