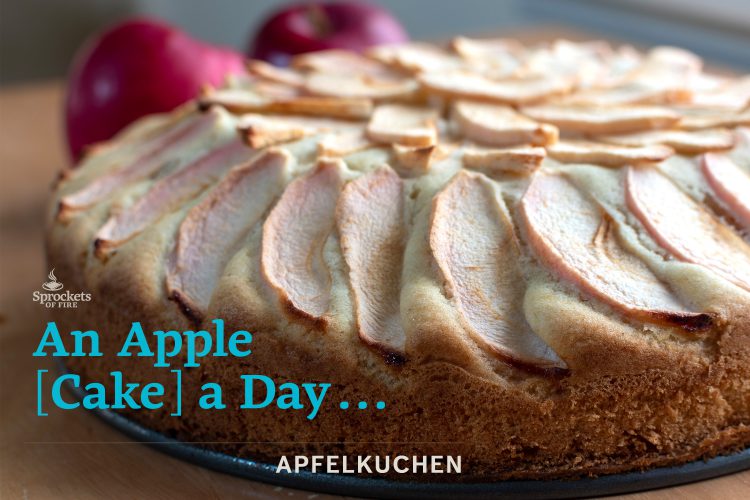 We’re in Germany! And we have two recipes that were soooo good, and which I made around Christmas time. Honestly, we ate a lot of cookies, cakes, and other sweets at Christmas and I have zero regrets.

LW: This was a fun recipe to find, as there are lots of yummy looking German desserts. It was a hard choice between all of the cookies, strudels, and cakes out there. We had a ton of apples in the house, and my search quickly turned up Apfelkuchen, or apple cake. I chose a recipe from Curious Cuisiniere to take for a spin and it was apparently a brilliant idea.

DW: How clever of you to bake a cake in the form of Otl Aicher’s StrahlenSpirale emblem! What an homage!

LW: There were no big shockers of an ingredient exchange:

LW: This is the best gluten and dairy free cake I have ever made. Don took one bite and said, “Save this recipe.”

DW: This was, in a word, unusual behavior from me.

LW: The cake was light and buttery, moist in the center and the edges had that crispy and caramelized taste that was fantastic. The apples were perfect in the cake, going a little soft and adding the best flavor. I may try this recipe without the apples and frost it just to experiment. I can’t wait until we can have people over again—this is definitely a crowd-pleasing recipe!

LW: Who’s ready for more cookies?!? I did a lot of baking around the holidays, so I hope everyone’s prepared for more cookie recipes. 🙂 First up is a request from a family member to experiment with her favorite oatmeal cookie recipe from Quaker. I love oatmeal cookies and I actually made some over the summer, but they turned out horrible and so I never posted them. It was pretty disheartening. Luckily I got another attempt and this time … success!

I made Quaker Oat’s Vanishing Oatmeal Raisin Cookies and here are the replacements I made:

LW: I wanted to experiment with the baking instructions, but I held back to make sure the recipe worked as laid out. It did! These oatmeal cookies didn’t bend or fall apart when you picked them up! (Yes, that did happen over the summer. I now know some oatmeal cookies can bend due to gravity and then swiftly meet the kitchen floor.) They were crispy on the edges and soft in the center once they cooled, though they hardened up as time passed, which I expected. The Craisins held up nicely and adding them to the dough didn’t change it, so I am certain raisins would work as well.

LW: There was the unexpected bonus that I’m the only one in the family who loves oatmeal cookies, so I got the entire batch to myself. I froze some and ate the rest, and I have zero regrets. Next time I make them, I’ll change out some gluten free flour to oat flour to see if it makes them taste more oat-ey while still maintaining the same texture.