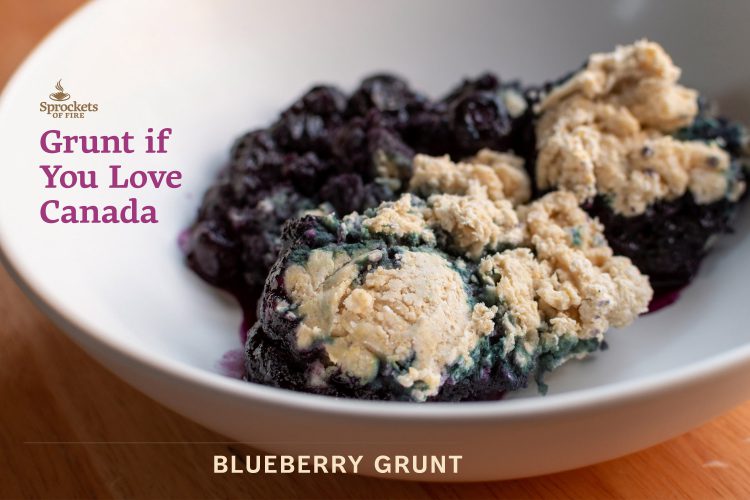 I’ve been excited to return to Canada, because I’ve loved looking for local recipes to try. It was an easy decision on what to try, once I found the blueberry-filled recipe below. Of course, I had to go back to the drawing board on the chocolate chip cookies. Did I strike out again or hit it out of the park? Read on!

LW: There was no question about what I’d bake once I saw this recipe for blueberry grunt. I ❤️ blueberries, and we’ve found some good frozen brands lately. The recipe was a big hit, though the kiddo preferred the “grunt” to the blueberries. I can only imagine how tasty it would’ve been with fresh blueberries (if they won’t kill you).

DW: It was great! I do think she objected to the blueberries, and would probably do better with wild or fresh blueberries rather than frozen. But we do what we can in the pandemic!

This was a pretty easy recipe for substitutions.

I had to add a few tablespoons of water to bring the dough into a biscuit texture. I’m not entirely sure it was the right move, since it looked a bit wonky when baking—almost like the dough had split. However! It came out of the oven absolutely amazing. The part of the bake that I thought had split was the best with the biscuit mix and blueberries combining into the tastiest part.

DW: It’s interesting—the look of the grunt suggests it will taste like crumb coffee cake or even a blueberry muffin, but it’s definitely biscuit. The flavors work well together.

LW: If you’re a blueberry lover and have some lying around, I highly recommend trying it.

Now onto the third attempt at chocolate chip cookies. To recap, we’re looking for a recipe that produces crispy chocolate chip cookies. Ideally the recipe would be one that will work for gluten-free and gluten-filled baking. This time around I went with a recipe from the New York Times Cooking for Perfect Chocolate Chip Cookies, which Don stumbled across and sent to me. (I still have no clue how he found the recipe!)

As a reminder, we’ve had two failures here, so how did it go this time?

LW: VICTORY!!!!!!!! I am still in awe of these cookies. It’s a week later and they are still crispy and yummy.

The mix was very dry and it took some efforts to get it fully combined. The recipe calls for refrigerating the dough on parchment paper overnight…use the parchment paper, since the dough will stick if you don’t. (Lesson learned for me.) I made the cookies a bit smaller, so we got 22 out of the mix instead of 14. I baked them on chilled baking sheets for 12 minutes, since my cookies were smaller than the original recipe. They weren’t super firm when coming out of the oven, but cooling them on the baking sheet fixed that.

Do you see that crackly cookie top?!? 😍 These were amazing. Best chocolate chip cookies I have eaten in five years. Once cooled, the edges were crispy and caramelized, while the centers were gooey. I had been looking for a fully crisp cookie, but that clearly hadn’t been working, and honestly these are just so good I don’t even care.

DW: Outstanding. Third time’s a charm! I will eat these, Sam I Am.

LW: So why did this recipe finally work? I think not melting the butter was the biggest reason it worked, and chilling the dough overnight allowed all of the flavors to combine. These were a huge hit with the family too and they are now our go-to recipe.