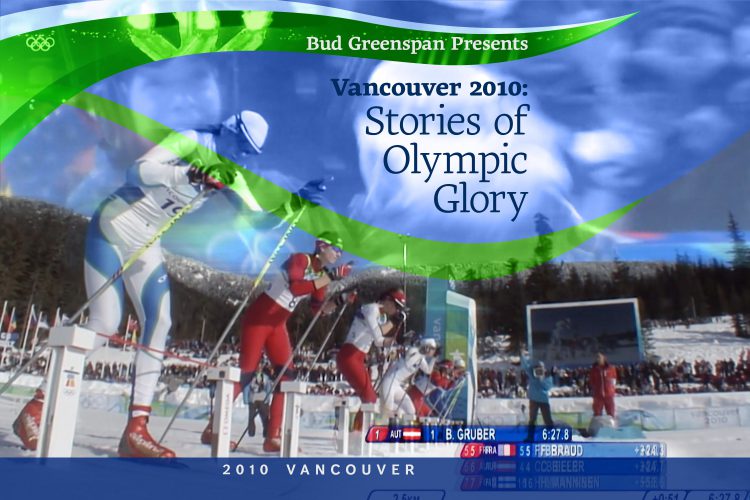 Vancouver marked the eleventh and final outing for the late Bud Greenspan, cementing what is surely an untouchable record for Olympic films. It’s the fifth we’ve watched so far, having previously looked at Los Angeles, Lillehammer, Calgary, and Torino.

As I asked when we discussed the Torino film, is there anything new here to bring the stories and host city to life? By now we certainly know what to expect from Greenspan films, those exemplars of the up-close-and-personal, delivered in a dispassionate bystander documentary style.

DW: Just like the Torino film, this is one of the Showtime partnership films, and for this outing Greenspan was allotted more time, coming in just under two full hours. These 116 minutes shine a spotlight on six stories:

The stories are all fairly interesting, as expected. Heil battles Kearney on the first day of competition in a fruitless search for the first-ever Canadian gold at a home Games. A look at the history of pairs skating is helpful context, with footage of Chinese coach Yao Bin competing at Sarajevo framing his efforts on behalf of Vancouver medalist pairs Shen & Zhao and Pang Qing & Tong Jian. It does feel like a triumph for athlete and coach alike, and the charming story of Zhao’s botched on-ice proposal at the 2007 World Championships is quite affecting.

LW: It was definitely a heartwarming story and a great addition.

DW: Clara Hughes’ amazing career over six Games—summer and winter—is detailed, and her enthusiasm in all things comes through well in this format. Her segment is one of the highlights of the film, and I enjoyed the deeper look at her work with Johann Olav Koss’ Right to Play, which was a nice connection to Greenspan’s Lillehammer and Torino films.

Viewers will find themselves wincing in sympathetic pain as Petra Majdič struggles through injury and a unique agony of victory en route to a bronze medal. It feels a bit like watching an NFL running back keep getting up after taking helmet contact. However, we have to admit being impressed with Majdič’s courage, despite being simultaneously alarmed.

LW: I don’t think I’ve ever yelled at a movie more.

DW: Finally, the ice hockey segment which closes out the film makes clear how much the two Canadian golds meant to the host nation, though it somehow manages to still feel flat.

By 2010 high-definition digital video had finally become the norm, and we’re treated to a modern 16:9 (er, 1.78:1) format. The rough mix of mismatched formats seen in the Torino film is noticeably improved. Yet there’s something missing in this film, visually speaking.

Color feels unexpectedly muted, there are moments of oversharpening, and what appears to be a heavy reliance on OBS broadcast footage. Overall the visuals are still kind of soft and muddy. I recall the Vancouver Games looking much brighter and full of saturated color. Naturally a filmmaker can use color as a tool, but I don’t think that’s what is happening here.

I don’t think it’s unfair to compare this to Greenspan’s original masterpiece, 16 Days of Glory. While the format is essentially the same, the cinematography of the earlier film is miles beyond what we see here. (I assume the budget was a lot higher as well, which may be a big part of the story.)

I also can’t help myself from comparing it the most recent film we discussed, which happens to be the immediate successor to this one, Caroline Rowland’s First. It’s true that film benefited from another two years of technological progress and likely a bigger budget, but it’s so much more alive and vibrant that I have to mention it. It takes a different angle on a familiar format, and through visual and audio means results in a film that feels fresh and far more invested in the stories it’s telling.

Everything I said about Torino from a technique perspective, still holds, despite improved technology. There’s a lot of broadcast footage—including the use of OBS graphics as a crutch for storytelling—and too few well-composed shots. Too much slow motion is used ineffectually, and there’s an abundance of achingly slow crossfades. Paired with an unremarkably standard “uplift” synthesized soundtrack, the result feels like an awkward mix of saccharine inspiration and dispassionate news journalism.

Where Rowland conducted interviews with thoughtful composition in various settings, Greenspan has essentially the same shot for every interview:

Petra Majdič shows up outdoors, Yao Bin, and Clara Hughes’ teammate Kristina Groves and coach Xiuli Wang appear in front of a rink, but virtually everyone else is shown in what is effectively an identical composition and setting. This just adds one more layer of “sameness” to Greenspan’s body of work and leaves us doubting his commitment to exploring new ideas in these films.

There are a number of instances where two shots are shown in a grid format, with varying effectiveness. Only in the ice hockey segment does this technique approach a truly illuminating usage: Ryan Miller (USA) graciously breaks down the winning goal Sidney Crosby (CAN) scored against him, and Greenspan shows Miller narrating as the play unfolds.

It’s an interesting attempt to explore in-the-moment analysis, but it’s hampered by absolutely glacial pacing. Full-speed video is cranked down to frame-by-frame slow-motion, stills get zoomed in on à la Ken Burns, and then suddenly the puck is in the net and pandemonium ensues, still in slow motion with yet another zoomed frozen frame—and then immediately we see aerial footage of the city (what?) as a means of segueing to the medal ceremony. It’s puzzling, and by missing an opportunity to communicate the tremendous energy in the background, it falls short of the much more dynamic presentation of the men’s cross country race that closes out the Torino film.

Oddly, in all of this, there’s no montage of other sports until the very end, where Canada’s Joannie Rochette and the USA’s Apolo Ohno finally get a momentary cameo mixed in with a revisiting of clips we’ve already seen.

I wanted to see an exciting film about a modern winter Games, full of energy and optimism, but it’s just the same Greenspan formulation, largely indistinct from every other Greenspan winter film with “Stories of Glory” in its title. Sure, there’s a little bit about the host country at the opening, and we get a bit more about the national identity in the hockey segment. But there’s hardly anything here about what makes the Vancouver story unique. The laser focus on the stories of individual athletes’ efforts coupled with the nitty-gritty of scores and times, presented in a matter-of-fact telling results in a fairly unmemorable film.

Despite the presence of new names in a different city (only vaguely introduced), this film about the Vancouver Games manages to present hardly anything new. While the previous Greenspan film on Torino offered at least a bit more emotion and a clear fondness for the location, this time out there’s something lacking. I think Canada deserved better.

And please, don’t get me started on how much chintzy Verdana is in this film.