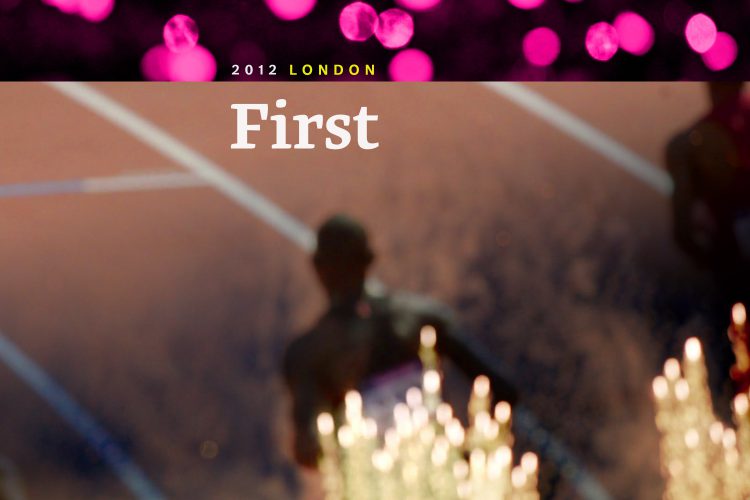 First is the story of the Games of London 2012; or rather, the story of a selected group of first-time Olympians. Director Caroline Rowland—who won the job after creating the London bid film—has developed a new approach to Olympic documentaries. Though at first blush it seems to have a common thread with Bud Greenspan’s films, it’s actually very different. Far more emotional and stylish, this is a decidedly 21st century film.

First has the unique distinction of being the first Olympic film to debut in theaters in the same year as the Games it chronicles. In fact, when it was released stateside in 2013, Liz and I actually went to see it in our local theater.

DW: Well, I had eagerly followed London 2012 from buildup through post-Games, and was aware First was on its way, going so far as to actively spread the word on Twitter. Full disclosure: Rowland’s New Moon production company sent me a complimentary copy of the film on Blu-ray after I noted that our local theater botched the presentation and we missed the first half-hour. It turns out that first 30 minutes is crucial as most of the featured athletes are introduced there.

At the time I had only seen 16 Days of Glory (often) and Tokyo Olympiad (once). I went into it expecting something similar to Greenspan’s work, and based on that—and the theater’s screwup—I came out of it a bit confused. The narrative method is totally different, and the story Rowland tells is focused on something bigger than the details of competition.

Revisiting the film for this blog, armed with a new perspective after watching so many other Olympic films, I’ve been unraveling this complex piece to understand what Rowland set out to achieve. I still think a clear communication of certain details would have been welcome; however, this was a conscious choice on Rowland’s part, and her focus on journey and emotion is absolutely effective. I suspect the thought was that those details (the specific facts & results of competitions, stated overtly) would work to take the film out of the realm of the athlete’s experience, grounding it too much in the nitty-gritty.

The Journey is the Story

From a storytelling perspective, the film feels like an evolution of the format developed and standardized by Greenspan, with some important differences. Where Greenspan consistently presented self-contained vignettes, Rowland weaves the athletes’ stories into each other, revisiting each as the Games begin and competitions progress. Greenspan used dispassionate narration to help the viewer understand who the athletes are and how their competitions went. Rowland is much less interested in the specifics of each event and result, preferring to present an impression of the athlete’s journey.

LW: This was really different than the past films, though I appreciated the difference. Perhaps because I remember the 2012 Games and didn’t need to see the results.

DW: I suppose all that did happen. Fair enough!

Anyway, as mentioned above, I think I would have appreciated some direct statement of each athlete’s name and discipline. In the first act when we meet them all, there’s a momentary typographic overlay stating where we find them. However, the alert viewer picks up on all of this through the progress of the athletes’ training and competition. Audio from television and in-arena public address announcers fill in the details, supplemented by occasional looks at results scoreboards.

I think this strategy forces the viewer to pay attention, getting to know each competitor gradually, rather than being fed a title screen of facts. Rowland wants her audience to be involved, and in this way demands it. It’s a daring and confident choice with the effect of rewarding the engaged viewer. The cues provided help avoid the bewildering experience of the early silent films, which are extremely inconsistent with titles, and probably impossible to take in completely without a carefully constructed viewing guide.

Orozco, a gymnast, serves as the main protagonist of the film, with a showing of quiet strength in the face of disappointment. Judoka Kelmendi and BMX racer Buchanan fail suddenly and unexpectedly, while Trott rockets around the velodrome, explaining the Omnium event as she goes. Rudisha’s eloquent words embrace his competitors and celebrate their efforts as he marches to his astonishing world record performance.

There are only a few sit-down interviews, and they never feel staged in the way that many of Greenspan’s do (see Maurilio de Zolt in an alpine meadow). The athletes are the primary tellers of their own stories, and it feels very natural. Family members are involved in the storytelling as well, and always support the emotional nature of the athlete’s journey. Particularly noteworthy is Orozco’s late mother Damaris, who recounts the difficult childhood he withstood in New York City. Her emotions are raw and the viewer can’t help but be invested in Orozco’s story. The sad knowledge that she would pass away before he could try for a second shot in the Olympic arena makes her devoted words even more bittersweet.

Though not every story told has a happy ending (it seems there are as many disappointments as triumphs), this is much closer to the reality for the vast majority of Olympians.

As is our wont here at Sprockets of Fire, I should mention that in First, women are finally front and center, appropriately so as the London Games have frequently been referred to as the Women’s Games. This is driven home by Underwood & Taylor, who speak about what the inclusion of women’s boxing means. From here Rowland jumps to a montage of women from Brunei and Qatar, focused on US-born Sarah Attar, running the 800 meters in full head-to-foot covering for Saudi Arabia. Audio of then-IOC President Jacque Rogge notes that it was the first time every attending nation included a woman on its team. We rejoice!

DW: First is absolutely stunning to look at. It’s lavishly shot with a variety of film speeds, beautifully saturated and vibrant visuals, and razor-sharp in its high-definition origin. Add to that a killer selection of totally unexpected music, and the result is a sports documentary that pulses with style and feeling.

It’s tempting to describe this as akin to a glorified music video, but I think that would deeply shortchange what Rowland’s actually doing. The music does drive the film along, and it never really drags, even despite cinematic techniques that frequently slow the action. These moments of close focus, and deep background bokeh are paired so well with the soundtrack and dialogue that the film itself doesn’t slow, and the viewer is pulled further into the emotion of the journey.

Employed as they are, these aesthetic attributes are complementary narrative techniques, completely conscious decisions made to support the film’s emotional, humanistic viewpoint, rather than just arbitrary selections from a stylistic toolbox. This idea of the soundtrack as a more overt component feels contextually appropriate, as music is often a very personal and important partner in an elite athlete’s training journey.

There’s a powerful cut from Sidhu’s unsuccessful 10 meter air pistol qualifier to the briefest of Olympic events, the men’s 100 meters. She looks lost as she quietly navigates the mixed zone after leaving the competition floor, while speaking of her palpable anguish. She compares her quick exit to the ten seconds of the 100 meters. Rowland then immediately shows multiple heats of the 100 as a single compilation where the sprinters propel themselves down their drag strip to the sound of revving engines.

Another compelling choice is the use of film speeds to effectively narrate the men’s 200 meter final: Rowland alternates between LeMaitre (6th) in sharp slow motion and Bolt (1st), Johan Blake (2nd), and Warren Weir (3rd) in a frenzied blur.

But easily the most beautiful segment is the men’s 800 meter final. Rudisha’s incredible effort is intercut with a ride through the Kenyan landscape, paired with Michael Kiwanuka’s splendid “Home Again.” The emotional effect confirms that every road an athlete ever runs stays in their body, to be part of the whole journey. Rudisha’s world record nearly destroys the field behind him but it’s as if he’s still just running through the roads of his childhood. He celebrates his competitors and recognizes that they were each part of the effort—and acknowledges his own father’s success at Mexico 1968.

The film wraps up with a lovely montage of evening scenes and the Closing Ceremony, plus a revisiting with the featured athletes as they take in the sights, celebrate with their families, or continue to train after the Games. Again, here, an expert pairing with Brandon Flowers’ “Only the Young” provides an upbeat note to look back with and then, with optimism and hard-won wisdom, depart into the future.

Rowland’s fresh approach is a very interesting way to handle the project, and might help further the feeling that each one of these athletes is connected through their efforts in this great gathering. Several of them even provide verbal segues to other events. However, somehow the stories never quite manage to fully unite. The athletes end up feeling rather isolated, and it may have something to do with the cinematography and lack of narration.

While I always love to see footage of athletes mingling in the Olympic Village like we have in many past films, its absence here doesn’t bother me. We often find that elite athletes do have a somewhat isolated existence, devoted to their training and mostly involved with a tight circle of family and team members.

The weaving of the stories together, alongside many well-composed establishing shots, succeed in telling an overall story of the giant festival the modern Olympic Games have become. It is a collection of disparate and deeply personal moments, played out on the world’s biggest stage, in a great city. The connection between them is less overt, and more rooted in a shared goal of reaching one’s fullest potential at the exact moment of greatest urgency.

What do we take away from an Olympics? I think it’s always something bigger than results and records. I think it’s a feeling, an experience, some lessons to carry away for the rest of life’s days.

While a competition usually goes right for someone, it often doesn’t go according to plan for every athlete. It’s right to celebrate the losses alongside the victories. That’s a very human story, and in that way, I think First manages to be the most authentic film we’ve seen yet.

LISTEN TO THE FIRST SOUNDTRACK