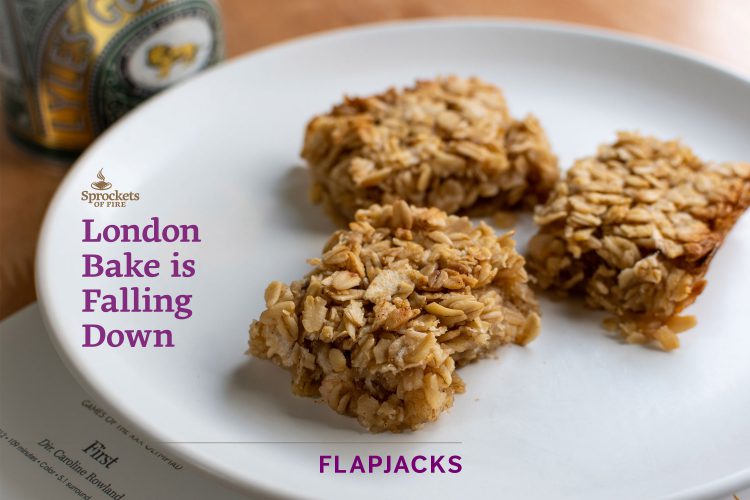 Well, it’s been quite a while since we’ve posted. I’d like to say there was a good reason, but really … we were just tired. There was also a period of time when I couldn’t find what I needed to bake. One of the recipes here failed because of that, which was disheartening. But we’re back now! So without further ado, here we go with the next round of recipes.

First up are flapjacks! I’ve been waiting for us to cover the London 2012 games, because I desperately wanted to make Lyle’s Apple Pie Flapjack recipe. I’d come across the recipe after we had to find golden syrup for our Anzac biscuits and it sounded way better than American flapjacks (not that pancakes aren’t good). But British flapjacks are made of everything I love: oats, butter, golden syrup—how could a recipe go wrong with all those yummy things?

It can go horribly wrong if you don’t have enough of those ingredients.

This was a pretty easy recipe for substitutions.

I must have misread the recipe the first time, because I had made sure I had plenty of gluten free oats on hand but didn’t know I needed two sticks of dairy-free butter. We didn’t have enough on hand to make this recipe and the next chocolate chip cookie recipe, and there was none available anywhere near us. (Who knew there would be a run on Earth Balance butter during a global pandemic? Not me!) I ended up using canola oil and some water to get the liquid ratio correct, but that didn’t help.

The end result was a baked oat treat that completely fell apart when I tried to serve it. It tasted great, like an oat-ey apple pie, but it had to be served in a bowl and eaten with a spoon. That’s not normal for flapjacks.

DW: Well, they did taste really good. I think we ought to allow this recipe a repechage for 1948.

LW: In any event, I definitely recommend this recipe if you love oats and have some golden syrup handy. Just double check that you have two sticks of butter, not one.

We’re on to the second chocolate chip cookie experiment and still on the hunt for a crispy gluten and dairy-free recipe. Was this recipe from Handle the Heat (which looks perfect) a success?

This time the issue wasn’t refrigerated or unrefrigerated dough, it was the bake time. The first batch was in for 12 minutes, but they looked burned and so I lowered the bake time. That did not work. While the next batch did have a slightly better flavor, the cookies fell apart when we were eating them. Completely fell apart. (Apparently a theme for this blog’s recipes, huh?) However, in a brilliant move, I filled them with regular ice cream and froze them. The chocolate chip cookie ice cream sandwiches were a hit with Don and the kiddo.

So why have these two batches of cookies failed? I think it’s melting the vegan butter first. This process works with regular butter, but it just does not with the vegan butter I have in hand. So I am conceding defeat on crispy chocolate chip cookies and going to try a non-crispy recipe that does not require melting butter first. I’m not giving up on good chocolate chips cookies!