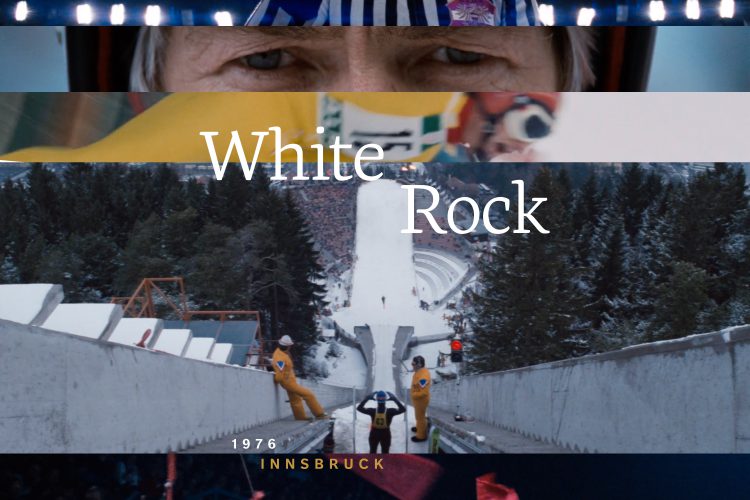 In our ongoing review of Olympic films, we’ve begun to see some patterns emerge. We have the silent era films, which are mostly a string of newsreel-style segments. There is the mid-century meet-a-city tourism genre. There is a select group of films with artistic viewpoints. There is the enormous Greenspan body of work.

And then there is White Rock.

LW: This is definitely not the usual Olympic film. It was awesome and made us laugh at the sheer craziness of it. It was exactly what we needed.

DW: It’s got cigars, hot wax, rifles, and a Hollywood actor. It’s the retro-macho Winter Games, and you’re going inside the action in a brand-new way.

This is Really Something

For White Rock, the film of the XII Olympic Winter Games at Innsbruck 1976, producer Michael Samuelson and director Tony Maylam enlisted noted tough-guy actor James Coburn to take viewers on a truly unique tour through the events held at Innsbruck.

James Coburn doesn’t simply provide a voiceover narration. He doesn’t sit behind a desk and reflect on some recollected themes of the event. No, sir.

He jumps in a 4-man bobsled. He fires a rifle on the biathlon range (because of course Coburn fires a gun in a film). He suits up in goal for an ice hockey training session.

It’s insane, and it’s incredible. Who else but an actor like Coburn could pull this off without looking vain, or else a bumbling doofus? That run on the bob track earns a helmeted yawn at the bottom. After a second go at it—this time simultaneously driving a 2-man sled and commenting during the run—Coburn segues to the luge. It looks like he’s on the sled: the slider is wearing his “JIM” helmet. And of course, we assume he is, because he’s James Coburn. But at the bottom, the slider halts, and there’s Coburn in jeans beside the track, smirking at our gullibility, reveling in his cleverness. He sits down on the wall and smokes a cigar.

As for the bit about the wax? In the ski shed we find him waxing skis, and talking about the various waxes and their purpose, identifying them by color. He holds up the white wax. “That’s my secret.” Another smirk. He’s laughing at us. We love it.

Given the talent involved, it’s no surprise that White Rock is shot in a cinematic wide format. This is hands down the best-shot film we’ve seen so far, with world-class cinematography. The picture is sharp and colorful. Angles on the action are varied, dramatic and unexpected, taking the viewer inside the sport in a way we haven’t seen before. Stable and beautiful first-person action footage complements stunning wide shots of venues.

The K90 ski jumping competition features particularly outstanding imagery. Yugoslavia’s Branko Dolhar is tracked from the top of the tower as he races down the slope, hits the jump, disappears over the hill, and then reappears on the outrun: a brightly-colored speck against a wide expanse of snow, with mere hints of the massive crowd on the margins. It suggests the daring of the individual athlete, who in that moment can rely on nobody but himself as he fights the irresistible forces of gravity and wind. Typical themes for Olympic films, sure, but here they’re more subtly delivered, with great style.

Watching the film again I’m struck by the sheer number of perspectives on each event. There are countless viewpoints on the ski jumping—either the team had an unprecedented number of cameras or the crews just kept moving after every two jumpers. The result is an incredibly dynamic and rich look at the competition, venues, and setting.

For American audiences, one of the major figures at Innsbruck was Dorothy Hamill (USA), who won gold in figure skating. She is one of the casualties of the production approach, which focused exclusively on a few select events (and only the pairs skating segment and a quick alpine skiing montage feature women). The American pair of Tai Babilonia & Randy Gardner provide an intro to the skating event with a beautiful outdoor demo on a frozen lake.

The big star was Franz Klammer (AUT), who won the men’s downhill in a legendary seat-of-the-pants run at Patscherkofel. That run is featured with great footage, including an analysis of Klammer’s ability to stay upright on the last left turn, compared directly with two other skiers who didn’t fare as well.

Put yourself in a pinball arcade, lights flashing and games doing their thing. Are you there? Good.

Now, imagine that amongst the din, some long-haired electro-rock band is jamming out of their minds on their keyboards, playing a set that’s got bits of 2001: A Space Odyssey and Abraham’s Theme from Chariots of Fire, and … well, you just have to hear what Yes’ Rick Wakeman cooked up for this film. It’s totally crazy. I can sort of pick out how it might be the grandfather to some of the synthesizer notes in 16 Days of Glory’s decathlon, but it’s really just over-the-top mid-70s enthusiasm. I guess? It totally works with the overall gestalt of the film. Seriously, go check it out, just for a taste:

Note: Sprockets of Fire is an affiliate partner with iTunes/Apple Books. Links on the site help support the blog.

We’ve established that this is a really unconventional Olympic film, unlike anything else we’ve seen so far. And that’s good, because it’s really entertaining! And it does provide a snapshot of the second Innsbruck Games. That it’s the Olympic Movement’s second visit to Innsbruck is key. Only 12 years earlier, in 1964, the world was introduced to this Austrian city, so it wasn’t necessary to dwell on the location or the particulars of the culture: in theory it was already familiar. I suspect this gave Samuelson and Maylam license to do something different, and that’s exactly what they did.

I really appreciate the complete conviction they brought to the project, carrying the concept all the way through these taut 76 minutes. The film is never half-baked or unsure of itself. Coburn is absolutely convincing, even despite the dialogue, which in retrospect is a little much. Here, at the end of the film, standing beside the cauldron, matter-of-factly performing a strident speech:

“In Delphi, when the oracle was there, the leaders of the world would stop the wars, and stage the Games, because their ideal was epitomized by the glorification of the Olympic hero.”

—James Coburn, beside the twin cauldrons of Innsbruck

Et cetera. Still, it works. I would have liked a better identification of what the heck actually happened at the events shown, and who the athletes were. With few exceptions they are mostly glossed over. This does have the effect of rendering these amateur athletes as unknown as those that finished last, which is probably relatively accurate in comparison with today’s professionals (unknown as most of them still are). It’s all done in service of weaving a tapestry of guts, effort, danger, achievement, and joy. An unusual way of getting there, but in the end, we get there all the same, and we are richer for the experience.

Now, if you need us, we’ll be eating Kaiserschmarrn while watching the freeze-frame speed skating montage over the credits. Whew!