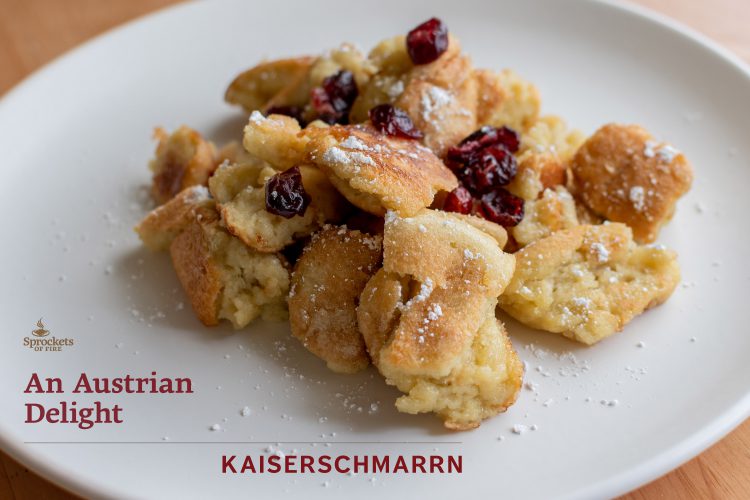 This week’s blog has been my favorite to date—on the film and baking side. It was 100% what I needed in this crazy time. If you have some flour and eggs lying around, you MUST try the local fare recipe below. It took a bit of time to make, but it’s not like there’s much else going on right now …. 😆

People, this next recipe was a game changer for me and I can’t recommend it enough—especially if you’ve gone gluten and dairy free and have desperately missed the crispy, sweet, egginess of French toast. Kaiserschmarrn is an Austrian shredded pancake dessert, and you need it in your life.

DW: Yes, yes, you most certainly do.

LW: I made a number of substitutions, in part because I had to work with what we had. So here they are:

We have a new flour on the blog! It’s been hard to find gluten-free flour at the store and I was nearly out, so I took some serious action to solve the problem. I ordered a 4 lb. bag of Pamela’s All-Purpose Flour from Thrive Market to give it a shot (and ordered 6 lbs. of my go-to gluten-free flour from King Arthur…I may have over-solved the problem).

DW: A risky culinary move forced upon us by circumstances out of our control!

LW: I couldn’t tell any difference in the flour, it worked just as well as King Arthur. This obviously means we’ll need to hold another cookie competition for a side by side comparison!

This was an easy recipe to switch out ingredients and it did not taste like it was gluten or dairy free. It was deliciously sweet and didn’t need anything other than a light dusting of powdered sugar. It is traditionally served with apple sauce, but I forgot. Perhaps next time I’ll remember! One thing’s for sure: I’ll be making this recipe again.

I’ll also note the recipe says it serves four, but I take issue with that.

LW: It served 2.5 Whelans. Honestly, I could have eaten the entire pan myself, because it was that amazing.

There’s one thing I haven’t really explored since I switched to a gluten and dairy free lifestyle: chocolate chip cookies. I’m not 100% sure why. But now I want to try until I find the perfect recipe, so be prepared for a lot of cookies until I do. (I ordered a ridiculous amount of Enjoy Life mini chocolate chips in preparation too. No regrets about this decision!)

DW: During these difficult times, we find ourselves in strange situations. Some hoard toilet paper or disinfecting wipes. At Sprockets of Fire, it’s chocolate chips.

So did I find the perfect chocolate chip cookie recipe on the first try? Nope. While the later batches were more crisp than the first, none of them had that crunchy edge I was hoping to find. They also softened as the week passed. They did taste great and disappeared quickly, as cookies do in this house! But I’ll have to find another recipe to try in two weeks. I am not complaining about that. 😊

Food of the Italian South

Fire on the Track