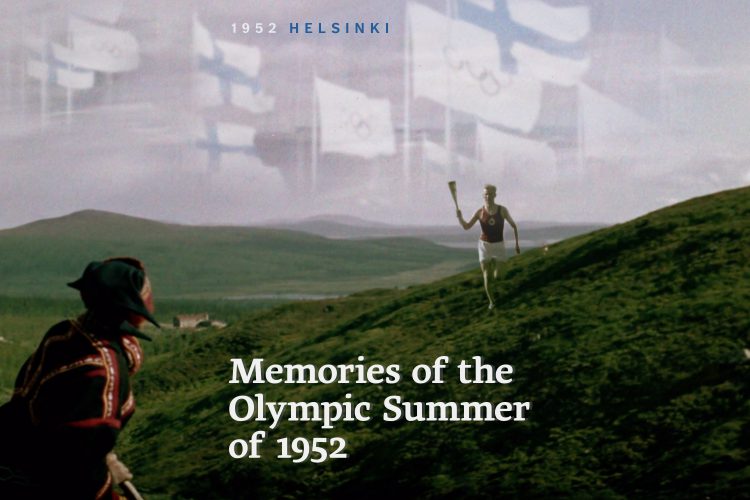 The Games of the XV Olympiad were held in Helsinki, Finland in the summer of 1952. It was a long-awaited festival: Helsinki had originally been selected to host the 1940 Games after the original host, Tokyo, withdrew due to Japan’s invasion of China. But the city never got to welcome the world in 1940, because, well, the world was busy waging war (Finland itself had been invaded by the Soviet Union in November 1939). So the staging of the Games twelve years later was highly anticipated, and the Finns made every effort to finally welcome the world to their country.

To document the event, the organizing committee saw fit to commission not just one but three films. The first in the series deals with the Opening Ceremony and track and field; the second looks at the rest of the sports program and the Closing Ceremony; and both are black & white films. The third film is the shortest of the three, and is more of a retrospective overview of everything that occurred, and it’s in color. This is the one we’ll focus on today.

Looking Back, with Mixed Emotions

Of all the films we’ve watched here (so far), this film seems quite unique in its clear-eyed reminiscences of what the Games meant to Finland. Usually, and not surprisingly, an official film presents the rosiest perspective on the event and its preparations. After an inspiring journey with the torch across the verdant countryside and an aerial tour of the venues and city, this one opens with what feels like grousing about empty hotel rooms and lackluster international attendance, and mentions how much of a downer the miserable weather was. It’s kind of a strange beginning.

LW: It was really odd. Also strangely echoing the current times, as hotels sit empty around the world.

DW: The sunny weather and blue skies of the tour quickly give way to the dreary downpour of the Opening Ceremony. It must have been a wretched day to be outside, and even in this color film the scenes at the stadium stand out in their relative grayness.

The final torchbearer is a surprise! Paavo Nurmi, now 55, speeds around the track, looking fit and strong as ever. The crowd is thrilled and so are the athletes on the infield. It’s a great moment, and the empty hotel rooms now seem forgotten. In the first of the other two Helsinki films, we’ll also see the great Hannes Kolehmainen, first of the Flying Finns, take the torch to light the cauldron atop the stadium’s landmark tower, but his appearance is omitted from this one.

It’s worth noting that there were three major national debuts at Helsinki: the new nation of Israel; the Soviet Union; and Germany (West only, as the East declined the IOC’s invitation to form a joint team).

Oh, and there’s an obligatory Duke of Edinburgh mention for the visiting royal, who apparently steamed over on a warship with his Royal Navy pals. I think I need to add a Prince Philip tag and see how many films gives him a mention.

Eventually, after 15 minutes of buildup (this is only a 50-minute film!), we finally get to sports and the tone quickly improves. For what may prove to be the only time, (field) hockey leads off! Some moments from the India-Netherlands final are shown, and it looks to have been a joyous occasion for the Indian champions and their supporters. We immediately see what will be a common theme in this film, as several long moments are spent with the winners being arranged for a photo. It’s an unhurried, casual approach that does leave the modern viewer questioning the editing.

Next up is sailing, an event naturally predisposed to unhurried filmmaking, and so we are treated to several minutes of majestic sailing vessels working their way around the course. It’s beautiful to look at, and the serene score works well with the visuals.

LW: Also the cameras weren’t rocking around, so no motion sickness. Hurray!

Aquatics follows and the narrator seems dismissive of the venue, suggesting the pool is less than ideal for fast times. This is unexplained, but it seems in keeping with some of the earlier comments.

Many well-known athletes made their names or burnished their legend at Helsinki, and we get to see many of their exploits in this short overview.

Shirley Strickland (AUS), who would be a centerpiece of the Melbourne film four years later, finishes third in the 100 meters behind her teammate Marjorie Jackson (who also won the 200). Strickland would win the 80m hurdles at Helsinki, though that isn’t seen here. What is seen is the profound disappointment in Fanny Blankers-Koen’s (NED) face as she is forced to withdraw from her semifinal heat in the 100 meters. After her astonishing four-gold performance in London in 1948, she was unable to win a single medal at Helsinki.

George Rhoden (JAM) took home gold medals in the 400 and the 4×400 relay, and we see both events. The Jamaican upset in the 4×400 was particularly meaningful, as it represented one of the few times the US team lost the event “on the track.” In fact, the US has won this event all but seven times. I was reminded of this recently while watching NBC’s “Olympic Week” replay of the London 2012 sprint events, which included the 4×400. There the Bahamas took gold, and announcer Ato Boldon remarked on how it was the first time the US had lost without a disqualification in 60 years. When was the last time the US was outrun in the event? The day that George Rhoden overtook Mal Whitfield in the final leg in Helsinki. The thrill of an unexpected winner receiving their award is one of the best parts of watching the Olympics, and the Jamaican team’s joy is one of the most rewarding moments in this film.

Diver Sammy Lee (USA) wins his third and final gold medal on the platform. Pat McCormick (USA), who swept the women’s diving events in Helsinki and Melbourne four years later, is not shown—or at least is not called out, and it’s virtually impossible to tell the identity of aquatics athletes in this film. Unfortunately, women divers and swimmers are mostly shown toweling off or climbing stairs, certainly an injustice. I’m eager to see is this is rectified in Gold and Glory, film number two in the triptych.

Decathlon legend Bob Mathias (USA) appears, and in a nice moment consults with silver medalist Milt Campbell (USA) after Campbell hurts his shoulder in a vault attempt. And the biggest name from Helsinki, Czechoslovakia’s Emil Zátopek, appears in two-thirds of his incredible triple-gold-medal performance, in the 10,000 and marathon. His wife, javelin gold medalist Dana Zatopkova, is on hand to cheer his achievement. Alert viewers will catch a glimpse of Alain Mimoun (FRA), favorite of Melbourne, working his way toward a silver in the 10,000.

A Pleasant Trip Despite the Rain

This film features some beautiful visuals, shot in classic 1950s color. There aren’t too many adventurous filmmaking moments, but there are some excellent segues: flags at sailing yield to flags at aquatics; pool water cuts to an equestrian water jump; a horse mid-gallop cuts to track cycling; etc.

There’s an unexpected moment in the diving coverage where two dives are shown in reverse motion. I’m not sure what the director’s point was, but it’s amusing and certainly grabs the viewer’s attention!

Overall this is a breezy yet unhurried journey through the XV Olympiad. Thankfully the downbeat commentary fades after the early section of the film. The rest is a pleasant mix of sport and ceremony, with plenty of looks at the spectators, city and landscape that made the experience. The marathon is a wonderful way to close it, with enormous, enthusiastic crowds along the route and a packed stadium.

After this nice little taste of Helsinki, I’m definitely looking forward to a deeper dive with the other two films. I’d certainly recommend Memories of the Olympic Summer to anybody interested in an introduction to the long-anticipated Finnish Games. After all, in color film, rain makes the grass greener!