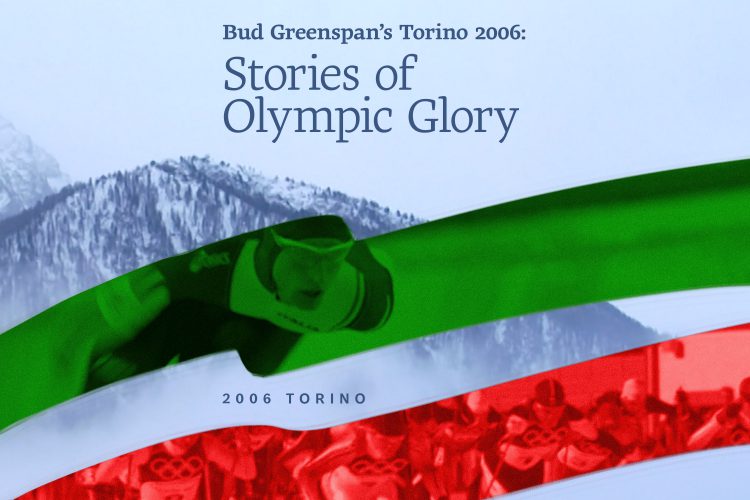 Torino 2006 marks the fourth Greenspan film we’ve watched, the first from the new century, and the penultimate outing in his collection of 10 films. His signature formula is familiar by now. This particular film has a somewhat peculiar provenance, however: it’s one of several he directed in partnership with the television network Showtime during the 2000s. Since we’ve gotten used to his format, my thoughts before watching one now hit on three main questions: how does it look, who’s featured, and does he try anything new?

This is an extremely economical film by Greenspan standards, perhaps a function of the Showtime partnership. At 88 minutes, there is only time for a few athletic features. A very nice introduction to the city, with a focus on its cultural assets, leads into Torino’s spectacular Opening Ceremony. This features the final performance of cancer-stricken Luciano Pavarotti, who delivered a powerful Nessun Dorma, albeit with some necessary trickery. It’s a fast-paced, exciting opening to the film.

Joey Cheek (USA) opens the action in speed skating, taking gold in the 500. This segment has a nice look at Cheek’s development as quad-skate racer and his experience at Salt Lake 2002. It then discusses his work with Johan Olav Koss’ Right to Play initiative, and Koss appears as well. It’s a nice connection to the Lillehammer film, one of a couple we’ll see here. A nice piece follows on gold medal figure skater Shizuka Arakawa (JPN), returning to the Olympic stage—she missed the 2002 team after representing Japan at home at Nagano 1998. Mao Asada shows up as well, though only to explain why the Japanese phenom isn’t at Torino (she was too young to qualify in 2006).

LW: I loved seeing Arakawa again and could definitely have used more coverage of figure skating!

DW: A vibrant, pulsing montage of various events serves as a sort of intermission, featuring the briefest of glimpses of snowboarding, hockey, and ski jumping, among others (here is Apolo Ohno’s only appearance). Then it’s straight back out to the beautiful Oval Lingotto for distance speed skating, where Italy’s triple medalist Enrico Fabris is highlighted. We see him proceed from winning his country’s first speed skating medal (bronze in the 5,000) to helping Italy win its first gold in the team pursuit, and then picking up the first Italian individual gold in the 1500.

And quickly we arrive at the final segment, a lengthy and engaging look at the men’s cross-country skiing events. Greenspan recaps the long-running relay rivalry between Norway and Italy, expected to be renewed once more in Torino. In the end Norway falters, and Italy finally gets their long-denied gold medal. The spotlight is on Giorgio Di Centa (ITA), which is fun because his sister is the great Manuela Di Centa, featured in Greenspan’s Lillehammer film. Giorgio adjusts his technique to accommodate the team’s needs, and they triumph thanks to a powerful third leg from Pietro Piller Cottrer. Oddly, we don’t really see much of Di Centa’s turn, but we’re assured he did his job. A week later, on the last day of the Games, he wins the first-ever mass-start 50km race, with a powerful finishing sprint. (I remember being excited to see this race, as the spectacle of all those skiers going at once was enticing.) The finish is captured wonderfully—great audio, multiple angles on athletes, coaches, and spectators. It feels like being in the arena.

Like the men’s marathon in the summer, this ski marathon’s medals were awarded at the Closing Ceremony, so the final segment transitions seamlessly to the main stadium. Manuela—now an IOC member—is on hand to present the gold medal to her brother.

With this film, produced in the mid-2000s, Greenspan continues to deal with the variety of production qualities coming from sporting events. There’s a mix of poor video transfers from archival sources (mainly events in the 1990s), Torino event broadcasts (presumably from Olympic Broadcasting Services—OBS), and the footage from his own team. His video is fairly easy to distinguish as it’s generally not as heavily interlaced or oversharp as the OBS feed, and it has more visual depth since he’s using different lenses than those on television cameras.

The film certainly suffers a little from the source mishmash, and because it was prepared for television exhibition. Of course, 2006 is still squarely situated in the middle of the digital format transition, so it’s unfair to compare it to the beautiful pure-film quality of his LA ’84 piece, or even modern high-definition video. There are weak spots, but by and large it’s a bright, colorful, film, capturing the vibrance of the competition venues.

By this point in sports documentary history, television broadcasts have become so pervasive and familiar that we may not blink when we see TV clips in a film, complete with onscreen graphics. And yet I’m always a little disappointed when they crop up. Granted, there’s endless footage of events available from OBS, and I assume using that as a backstop means fewer specialist camera crews and thus a more efficient production, with a lower budget.

This is not to say that there’s anything inherently wrong with television video. OBS has extremely high production standards and the resulting footage documents the in-the-moment specifics of the competitive efforts well. But I think I prefer a more contextual approach in a documentary film.

It’s something that bothers me about this era of Greenspan films. He was capable of such visual beauty, and yet we don’t see much of it here.

Not being a cinematographer, I can’t say how much that has to do with equipment capabilities, calibration of modern optics, the look of sport in modern venues with all of its accompanying infrastructure, or filmmaker intent. I can say that the film lacks some of that intangible atmosphere that we’ve seen in films of the past. It’s bright and punchy and sharp, but also a bit flat.

LW: I have to agree. It just wasn’t quite the same as others.

DW: I know a bit of depth is possible with modern gear, as we see some of it in the Beijing film, produced only two years later, and loads of it in the London 2012 film.

The most visually unique aspect of this film is the use of an inset grid to show multiple angles of simultaneous action. It actually works really well. Greenspan deploys the technique with a light hand, avoiding any gimmicky transitions or visual clutter, which I appreciate. Overall the film doesn’t feel adventurous or particularly artistic, but it tells its chosen stories adequately.

The series of six films Greenspan made from 1998 to 2010 are all titled “Stories of Glory” in some fashion or another, and perhaps that’s a clue to a much narrower scope than the expansive, ambitious 16 Days of Glory. The film’s short runtime doesn’t allow it to do much beyond parachute into the particular events it chooses, though it does tell those stories well.

I was surprised especially at the dynamic presentation of the finish of the men’s 50k race, and how it smoothly played into a brief look at the Closing Ceremony. In that way it’s quite economical. As usual, Greenspan does great work conveying the emotion of the events, and provides a window into how much it meant to the competitors. This is the real genius of Bud Greenspan’s work—he was adept at finding the small, human side of these colossal events and letting a few engaging stories represent those of all.