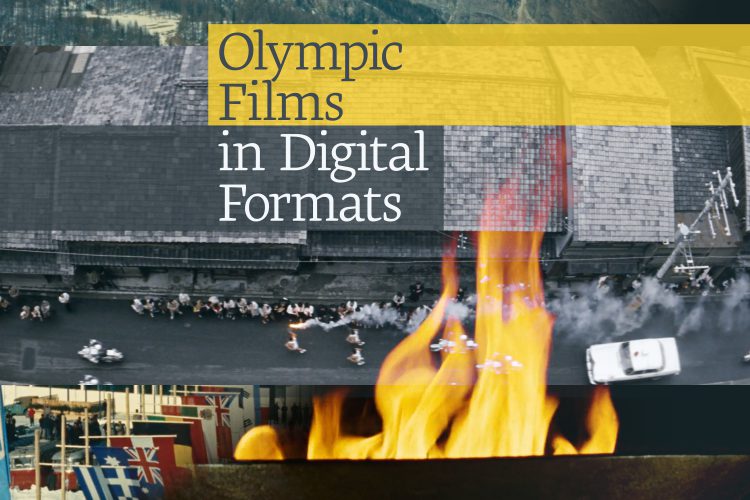 As a follow-up to last week’s summary of official films on the IOC’s YouTube channel, we thought it would be nice to take a look at another interesting selection. Criterion has broken out a subset of 11 films from the full box and made them available at digital retailers like iTunes. (All iTunes/Apple Books links on the site are affiliate links and help support the blog.)

This selection represents the cream of the collection, really, and you can watch them in their fully restored glory here. They are all offered for purchase at $14.99—but are happily all rentable as well ($3.99)!

If you’re not necessarily fired up about seven hours of Amsterdam 1928—which is understandable—but want to own the very best of these films, Criterion offers these 11 as an iTunes bundle ($49.99).

Purchasing or renting these films digitally is a great way to support the Criterion–IOC project, and also this blog! One of the primary goals for the film half of our site is to encourage fans of the Olympics to see these films, and gain a deeper understanding of the history of the Olympic Movement. While we would certainly recommend Criterion’s Blu-ray set (we do not have affiliate links with Criterion), we recognize that the digital offerings are an efficient and accessible entry point.

Now, if you’re not an Apple customer, don’t despair! There are two more options for digital watching:

These 11 films are also available at Google Play, though as far as I can tell there’s no bundle. This makes it a little harder to find them, but they’re all there—just search by name. Here’s Mexico 1968 to get you started.

Criterion has a streaming offering called The Criterion Channel. Here you can watch the entire set, including some excellent films we’ve already reviewed, like The Melbourne Rendez-vous and The Grand Olympics. The subscription also includes access to much of Criterion’s general catalog, which is phenomenal. If you’re here because you’re a film buff, that’s a fantastic option for you.

1936: Berlin
Olympia Part One: Festival of the Nations
I look forward to watching the Berlin films with palpable dread, but also curiosity, since Leni Riefenstahl’s work here is so highly regarded by film enthusiasts. If the viewer can get past the, um, obvious undertones, we expect there is quite a lot of artistic merit to be seen.
German. 2 hours, 7 minutes

1936: Berlin
Olympia Part Two: Festival of Beauty
These two Berlin films are the first summer films that attempted to do any storytelling. I mean, that storytelling was in service of evil, but academically they represent a major shift from the previous summer films, the last of which was Amsterdam 1928, since there was, incredibly, no Los Angeles 1932 film.
German. 1 hour, 43 minutes

1964: Tokyo
Tokyo Olympiad
Kon Ichikawa’s masterpiece is the gold standard in post-war Olympic films. With Tokyo 2020 postponed, this is a great fix if you’re bummed out like us. We mentioned previously that this is available on YouTube, but only the pre-restoration version. Criterion’s restoration is gorgeous. Watch it. Especially this summer, when we’re all going to be bummed about Tokyo 2020.
Japanese. 2 hours, 50 minutes

1968: Mexico City
The Olympics in Mexico
Shot in super-widescreen format, this is a really beautiful film in the tradition of Tokyo’s film. Long portions are devoid of commentary, with just ambient audio, an overlaid soundtrack, and minimal onscreen graphics. These segments, plus the format, really put the viewer in the arena. A slightly truncated version is available on YouTube, but for the real deal, hit up iTunes.
Spanish. 2 hour, 40 minutes

1972: Munich
Visions of Eight
The Munich organizers had a very specific hope for their “Joyful Games,” one of openness and peace. It didn’t quite work out that way, as we all know. But to watch this fascinating collection of shorts from eight acclaimed directors is to get new viewpoints on the sporting event that was, ultimately, so completely overshadowed.
English. 1 hour, 50 minutes

1984: Los Angeles
16 Days of Glory
Bud Greenspan’s first Olympic outing set a template for decades of future films. Lavishly shot and bursting with a massive selection of events, 16 Days of Glory is a wonderful record of the Games that saved the Games. Watch it and then read our review!
English. 4 hours, 44 minutes

1992: Barcelona
Marathon
This is a beautifully produced film of a truly exceptional Games. Free of commentary except for in-stadium announcers, it was beautifully captured on analog film with a judiciously used soundtrack. Unfortunately the YouTube version is a poor pre-restoration version, as the Criterion version is stunning.
Spanish. 2 hours, 10 minutes

2008: Beijing
The Everlasting Flame
The story of China’s emergence on the world stage, begun in Greenspan’s 16 Days of Glory, was fully realized in 2008 at Beijing. This film opens with a lengthy segment on the colossal, memorable Opening Ceremony, and then a mix of sporting highlights and athlete features. It seems a little overly reliant on broadcast footage, but thankfully it’s pretty high-quality footage. We’re looking forward to a full viewing here.
English. 1 hours, 41 minutes

1928: St. Moritz
The White Stadium
Just as the earliest film in the YouTube selection was the second St. Moritz Games, the earliest film in Criterion’s digital sampler is the first St. Moritz Games. 1928 saw the II Olympic Winter Games take place in this remarkable place. Sonja Henie wins her first Olympic title, the legendary Cresta Run hosts bobsled, and curling has an unofficial but charming appearance—before disappearing for 70 years. This past winter the Youth Olympic Games held some of its events in St. Moritz, making it a three-time host, in a manner of speaking. Despite being a silent film, this is a delightful look at the origins of winter sport, full of festive characters.
Silent, with a new score. 2 hours, 3 minutes

1956: Cortina D’Ampezzo
White Vertigo
This is the first winter film we looked at here, and it’s a fun, quirky little piece. Toni Sailer takes his star turn and the men’s 50km cross-country race is a tense experience. The setting, of course, is absolutely stunning from every vantage. In solidarity with the people of Italy, and with the Olympic world set to revisit Cortina in 2026, it’s a great time to check out the first excursion to this beautiful hamlet.
Italian. 1 hour, 36 minutes

1968: Grenoble
13 Days in France
One of the two Grenoble films, 13 Days in France seems to be about the feeling of being at these Games. There’s plenty of sport footage, but also plenty of spectators, behind-the-scenes visits, and even a nightclub outing. It looks pretty cool.
French. 1 hour, 52 minutes

Olympic Glory Bundle
Highlights from 100 Years of Olympic Films
All 11 of these films are available in a single bundle, which is a tremendous value compared to the individual prices: three films would cost $45; you can get 11 for $50. If you’re interested in owning these Olympic time capsules, definitely give the bundle a look!