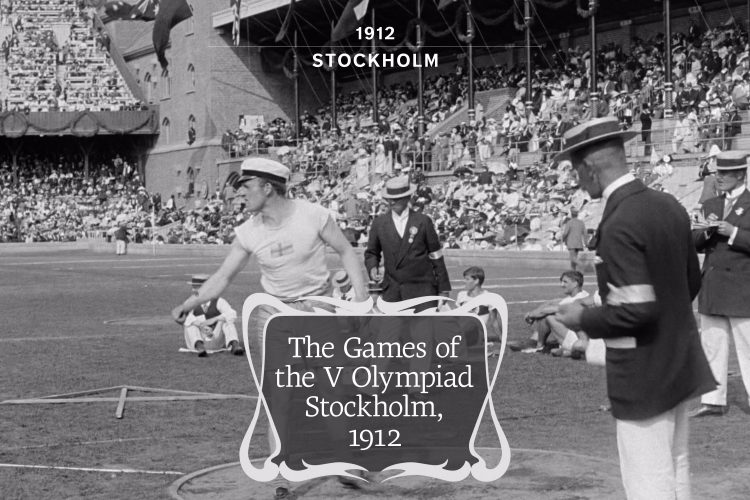 We’ve reached the final silent summer film in the Criterion Olympic Films collection, (LW: thank goodness) and it happens to be the very first one, from Stockholm 1912. We’ve already discussed a few of these silent editions (here, here, here), and by and large there’s no significant deviation from the format here. However, there are a few interesting things to note about this one, so let’s get to it.

The very first thing to say about this Olympic film is that it’s stunning to look at, almost unbelievably so. Criterion has done an incredible job restoring and presenting this over 100-year-old film. The lovely book included in the box set sheds a little light on the production and restoration:

The Swedish production company a.b. Svensk-Amerikanska Filmkompaniet struck a deal with the Stockholm branch of the well-established French studio Pathé for the production and distribution of films about these Games. Camera operators from both companies, under the supervision of Pathé manager Siegmund Popert, shot numerous brief, newsreel-style films. Only around two-thirds of these have survived, but what remains was restored by the IOC and in 2016 edited into an absorbing chronic of this sporting and social gathering, astonishing both for the range of activities it covers and the quality of its images. It is the most glorious of movie time capsules.

Glorious, indeed. With the clarity of picture and beautifully exposed imagery present here, it wouldn’t take much imagination to mistake it for a modern (high-budget) period film. Of course, the antique frame rate gives it away. We recently saw Stockholm’s mature Olympic Stadium in resplendent color in the 1956 equestrian film. In 1912 it was brand-new, and it absolutely shines thanks to the visual quality of the film.

Uniquely, this film opens with a detailed look at the Swedish Olympic trials which served as the inaugural event at the new stadium. Akin to a modern test event, I think we can safely assume it was sort of a shakeout for the stadium and production crew, in addition to being a vital qualifying event. These trials were held in early June. The football competition is also covered in this segment, as it was held at the stadium (and other venues) from June 29–July 5.

The middle and longest section of the film details with the events of “Olympic Week,” which comprised the bulk of the sporting events. Team arrivals are shown, along with some training. The Opening Ceremony takes place on July 6. During this time the stadium was configured for athletics and gymnastics. At the end of this part, on July 15, King Gustaf V presents the victors with their medals, laurel wreaths, and trophies.

I was surprised to see a further third segment after the awards, focused on the equestrian & nautical events. This felt exceptionally familiar since we’d so recently watched horses jumping in that very same stadium, albeit in a film 44 years younger. As it turns out, equestrian was held partially after “Olympic Week,” from July 13–17. Organizers would have had to reconfigure the infield at the stadium to accommodate the events, so this delay makes sense. Stockholm 1912 marked the debut of the classic equestrian events, and as was common for decades to come, the competitors were military cavalry officers. Watching these events with knowledge of the colossal conflict that would come two years later, it’s impossible not to wonder what became of them all.

LW: Yes, it was definitely interesting to watch this and think about that.

DW: Having watched multiple silent summer films, there’s not a lot new or unique here—in terms of format or presentation—that’s worth mentioning. What makes it so interesting is the context and quality. The 2016 editing has resulted in a coherent film that surpasses some of the others (I’m looking at you, Luce in Amsterdam). The new music composition from Donald Sosin excels in many spots throughout, providing a period-appropriate soundtrack and matching nicely with onscreen action. It’s quite pleasant overall.

The winners of the men’s and women’s tennis singles are shown goofing around with a camera, which is absolutely charming. The American team arrives via steamship and there is a sort of behind-the-scenes look at how clay pigeons are launched during shooting training.

During the Games proper, the marathon is, as always, fairly lavishly covered. There are cameras stationed at several checkpoints along the route, which affords a look at the countryside and unpaved roads of the time. An unfortunate photographer is run into by a competitor, and the film notes the sad fate of Francisco Lázaro. The Portuguese flag-bearer at the Opening Ceremony collapsed after 30 kilometers and died, becoming the first athlete to die in a modern Olympic competition. In the film, he is said to have died of exhaustion, though the truth is a little different.

LW: Wow, I suppose that’s a lesson in what not to do.

DW: Yes, and so began the long and sordid history of modern performance enhancement in sports!

In lighter matters, there is a short and strangely amusing demonstration of Icelandic Glima Wrestling, which is hilariously set to a tango (we tip our caps to you, Mr Sosin), and a funny false start in the men’s 100 meter freestyle. Road cycling race is witnessed by a huge crowd, proceeds through a misty meadow, down a wide city boulevard, and is eventually won with an astonishing finishing time of ten hours! On the track, hurdlers crash spectacularly into the barriers, which creates a look of complete chaos.

A truly odd interlude features a look at the Procession of Choruses!

LW: This was awesome in the weirdest way. I love when these films surprise us like this.

DW: It’s not explained in the film, so the viewer has to guess what this bizarre parade is about. Full of floats and artistic expressions of harmony with the natural world, it’s a complete non-sequitur, sandwiched by the standing high jump and Greco-Roman wrestling. When we watched it we assumed it was a part of the early focus on arts and culture that Baron Pierre de Coubertin insisted be included in the Games. I dug into the official report so you don’t have to, and learned that it was actually a “Grand Choral Festival” organized and staged by the Swedish Choral Association. In this part of the Festival, 6,000 participants marched through the streets and performed a concert at the Olympic Stadium before 27,000 attendees. In the film it’s pretty weird, but adds another delightful layer of texture, which we can appreciate.

One of the best visuals of the entire film appears in rowing, after the closing of “Olympic Week.” The course was set along Stockholm’s stunning Strandvägen, and it’s beautiful.

Hannes Kolehmainen (FIN) was the track star of Stockholm 1912, winning gold in the 5,000, 10,000, and individual cross country races. He also took home a silver in the cross country team race. Duke Kahanamoku (USA) set a milestone as the first Hawaiian medalist at the Olympics, winning the 100-meter freestyle race, plus a silver as part of the American 4×200 freestyle relay team. Jim Thorpe (USA), the celebrated first “world’s greatest athlete,” is unfortunately absent from the action footage. I was extremely disappointed by that, as I was very eager to see his events. However, he does appear in the awards ceremony, being presented with his awards, which included a large trophy for the decathlon.

Sweden’s King Gustaf V was clearly an enthusiastic supporter of the athletes and overall venture, as he appears throughout the film. Additionally, there was a special effort to enlist the nation’s boy scouts to help with the event, and they are also visible throughout. It must have been an exciting experience for them!

Having now visited Stockholm’s Olympic Stadium twice, we bid it farewell with affection. We also bid the silent era adieu for the time being, which is just fine with us. Stockholm’s early effort has been a delight of the period for us, and a potent reminder of how much has changed in sport and society, and how similar the fundamentals of competition remain.