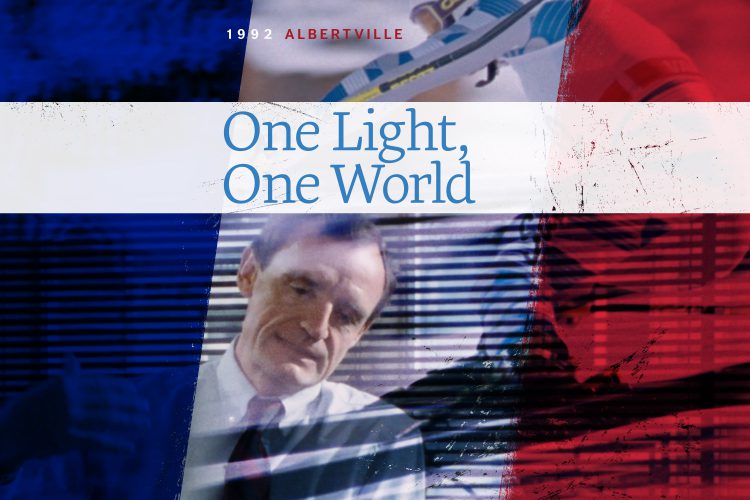 1992 was a particularly fascinating moment in time: in 1989 the Berlin Wall came down. In 1990 Germany was reunified. In 1991 the Soviet Union collapsed. Change was truly in the cold, crisp air of the French Alps.

The XVI Winter Games at Albertville, France in 1992 were the last edition held on the original 4-year cycle, in the same calendar year as the Summer Games. The next edition would start the staggered approach just two years later in 1994. Unfortunately for Albertville, that next gathering was at Lillehammer, widely viewed then and now as the benchmark for all Winter Games.

I remember Albertville ’92 fondly, but these Games are somewhat overlooked, effectively shoehorned between Calgary and Lillehammer. So many of the stars of Albertville returned again for an encore in 1994, and in many cases surpassed their exploits spectacularly.

I think the film itself holds an additional clue to why Albertville ’92 may seem unspectacular in retrospect.

What’s Fondue Got to Do With It

The film is interspersed by clips of an interview with Jean-Claude Killy, France’s famous alpine skier, recipient of the Olympic Order, and the co-president of the 1992 organizing committee. He ends up serving as a sort of occasional narrator of the experience as the film progresses. The French reverence for Killy is apparent, but for me the most important thing he says in this film is also the very first thing.

To paraphrase: over cheese fondue at a bar, Killy and Michel Barnier decide that the best way to get some nice new roads built for the Savoie region of France is to bid for and host the Winter Olympics.

I am not joking. This is literally 2 minutes and 40 seconds into the film. It’s pragmatic, but crushing: it cheapens everything that is about to come.

LW: We had to stop the film at this point to make sure we heard it right. Honest question: isn’t it cheaper to build new roads yourself rather than HOST THE OLYMPICS?

DW: It certainly is! Of course, we understand that Olympic bids have often been used as a means to improve or create needed infrastructure. But to have it spoken in such a matter-of-fact manner, right at the outset of the film, seems a very strange filmmaking choice.

Speaking of filmmaking, One Light, One World was produced & directed by Joe Jay Jalbert and R. Douglas Copsey. (Jalbert was a part of the crew on the terrific Downhill Racer (Criterion | iTunes), set in a fictional version of Innsbruck 1964.) I will give them the benefit of the doubt on some of the aesthetic choices, which I’ll get into, but suffice to say this film is definitely “of its time.”

Don LaFontaine contributes his famed voice with narration—sounding here like a cross between an 80s corporate video and one of his 5,000+ movie trailers. It accompanies all the action and manages to bury an otherwise pleasant look at the torch relay (following a torch-bearer through her experience) and a montage of sport action and Albertville’s famously weird opening ceremony. It’s not entirely LaFontaine’s fault: Copsey’s writing is overwrought and too wordy by half. It sounds like he’s just reading quickly from the script in isolation from the video component. The music is about what you’d expect from 1992: plenty of synthesizer and some 80s rock over action sequences.

LW: Dude, the opening ceremony was weird. Maybe it would have made more sense if we’d seen the whole thing and not excerpts?

DW: Maybe! But would it really have helped the film? Debatable! At every turn I’m sorry to say this one doesn’t rise to the level of many of the other films we’ve seen so far.

Immediately the Criterion release offers a warning (an apology, almost, really) about the visual state of the film. The early 90s were a transitional point from analog film to video production, and we’ll continue to see that painful change play out all the way through the first decade of the 2000s as Bud Greenspan targets television audiences with his films. Here’s what Criterion has to say about this film:

It’s not really all that bad, though there are rough patches where substandard broadcast video is apparent, and some poorly-exposed film segments peppered throughout. Disappointing, but I think forgivable. While it would have been lovely to see this period in glorious high definition, that simply wasn’t the state of technology at the time. Jalbert could have shot everything on film and it might have been breathtaking, but that’s not what happened. It’s still watchable.

What rankles me the most is the typography at the start of the film. Granted, I’m a designer, so I’m naturally going to be a little more sensitive to this, but wow! Here, just take a look at these gems, and remember: this is a film intended to tell the story of world-class athletes and a major effort by the host nation.

Dom Casual. Also used in the titles on productions of great gravitas, such as Barney Miller. Plus an unidentified hot mess of a typeface in blue gradients that feels like a Sega Genesis graphic.

This typographic travesty subsides after the opening of the film, but it’s a dreadful way to start, and coupled with Criterion’s warning all confidence in the following film vanishes. And then Killy crushes our spirits.

But enough of my black-turtleneck fussing about. Let’s talk about the sporting events.

We’ll get it out of the way: Alberto Tomba finally appears after getting basically stiffed in the Calgary and Lillehammer films. There’s a whole segment dedicated to the flamboyant Italian, complete with interviews in the Greenspan tradition. It’s … fine. Killy narrates Tomba’s second, winning giant slalom run, which is shown in its entirety. He effuses over the performance, and it’s truly one of the best moments in the film from a sporting perspective.

The men’s downhill is full of great closeups, but riddled with low-fidelity broadcast clips. Except for the silver medal-winning performance by Franck Piccard (FRA), it’s difficult to follow any individual performances because there’s so little variety in zoom level; the viewer doesn’t know where the racer is on the course, nor whether each successive clip is a continuation. The women’s downhill, won by Canada’s Kerrin Lee-Gartner, is similarly challenging, though an interview with Hilary Lindh (USA) helps. The crew filmed neat shots of skiers bursting forth from the start gate, though I suspect those shots looked better in concept than execution.

The camera crew did do some excellent on-board work: the men’s downhill and luge runs are experienced through an unexpectedly stable athlete’s perspective.

Austria’s Neuner sisters—Doris and Angelika—are featured in a nice segment about their 1-2 finish at La Plagne. NFL star Herschel Walker (USA) competes in bobsled. There is the usual ice hockey/figure skating contrast montage. The Soviets Unified Team win the hockey tournament. Short-track makes its medal debut, where Cathy Turner (USA) makes a stunning comeback from retirement to win the 500m race, pirouetting in celebration on the ice. Ski jumping’s newfangled V-style is discussed and Toni Nieminen (FIN) soars to victory. Diann Roffe-Steinrotter (USA) “tears the course to pieces” in the giant slalom to achieve an unprecedented tie for silver with Anita Wachter (AUT).

A rather strange visit to Conflans, a nearby medieval village, allows cross-country skier Stefania Belmondo (ITA) to introduce a segment on spirituality as it pertains to athletes’ competitive drive. Paul Wylie (USA) and Donna Weinbrecht (USA) add their thoughts. What’s really weird about it is the use of some dizzying visual techniques, and there’s no warning. It’s quite jarring, another odd choice in this film.

Just kidding, it’s only a clip in a montage introducing the first Olympic moguls medal event, where Weinbrecht wins. Sorry to get everyone excited.

LW: I got really excited (and confused) when this popped up. It would have been fascinating to watch.

DW: You’re not alone, at least on the confusion part! As for seeing what it was, YouTube pretty much never fails. Four minutes of “why?”!

The pairs skating competition mixes film and broadcast video, and includes a weird little bit about the judges, where the “new computerized scoring system developed by IBM” is mentioned but not followed up on. The segment really could have benefited from a more thoughtful presentation, as LaFontaine’s narration overwhelms the graceful onscreen story.

All that stuff I just mentioned happens, plus more, and it happens really fast. It’s hard to keep up with it all, especially given the cinematographic and voiceover approaches, which are frenetic and overwhelming, respectively. The result is mostly bewildering. What about insight into the Olympians from the new Baltic republics? What was it like for the former East and West Germans, suddenly competing as one team? Did Unified Team members have uncertainty or enthusiasm over their new status? Jalbert Productions wasn’t interested in any of that.

And then, after a brief look at the closing ceremony and an optimistic parting word from Killy about the destiny of the Olympic Movement, it’s over.

DW: But definitely no cheese fondue.