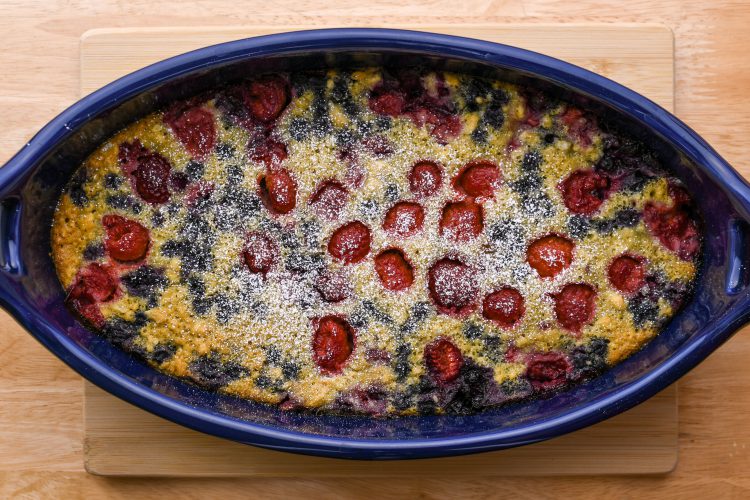 And we are back in France again! It was an easy pick for recipes this time around, as I’d had my eye on both of these recipes for a while. It was an absolutely successful week of baking too—dieu merci! Now let’s get to it.

For local fare, I settled on a berry clafouti, which is a baked egg dessert. It’s incredibly simple to make and was just absolutely delicious. Also, it’s great for breakfast the next day, because it’s basically a sweet quiche with fruit! (Not that anyone in our family had it piled with whipped cream at 7 AM…)

DW: We would never do such a thing…

LW: I’d originally seen clafouti in a French gluten free cook book I took out. It seemed right up my alley and so I filed it away to try. It was super simple to whip up and it baked while we ate dinner, so we had a nice warm dessert ready for us on a cold Sunday evening. Pretty perfect!

DW: This is one of the great things about this project. I may never have known this existed, and it was a delightful discovery.

LW: Without further ado, here are the substitutions I made.

The oat milk creamer was sweetened, so I used a little less sugar than was listed. I used frozen blueberries and raspberries for fruit and WOW was that a good call. The sharpness of the raspberries went perfectly with the sweetness of the eggs. Our kiddo has never liked raspberries, but they were her favorite part of this bake!

This is absolutely going on the make again list and I’ll be serving it when we have guests. It’s so easy! And bakes while you eat! I brought some to work the next day and got a huge thumbs up as well. Highly, highly recommend this recipe! (As if that wasn’t clear from my excessive use of exclamation points.)

Since the chocolate tahini cookies from Vegan Richa were such a hit, I thought I’d try my hand at her chai spiced tahini cookies next. Honestly I’m not sure how I never made tahini cookies before this blog, because they are just the best thing ever.

These cookies are simple to make with not a lot of ingredients and easy to whip up while something else is baking in the oven. I used millet flour as my gluten free flour, since I had a full bag on hand from a bread recipe I made earlier this year. The cookies would be just as good with regular gluten free flour (or the coconut flour called for in the recipe).

LW: These were just the right amount of sweetness without being too much. I think I preferred the chocolate version, but these were yummy. We’ll definitely be making more tahini cookies here!

DW: Again, a neat surprise. I could see these being great with tea. Why didn’t I try that?? Ah, next time.

LW: There will be plenty of next times!

Food of the Italian South

Fire on the Track