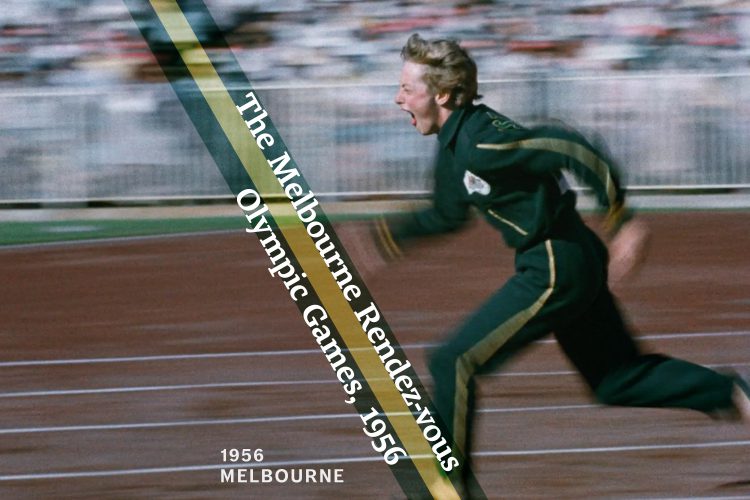 Last time we discussed the two small films of Melbourne/Stockholm 1956. This week we’re going to move on to the Summer Games proper with a pair of films focused on the breadth of events held in Melbourne. Despite having a similar scope, they’re incredibly different.

Olympic Games, 1956 is director Peter Whitchurch’s brisk 60-minute sprint through the sporting events of the Melbourne Games. In a way, it’s a perfect pair for The Horse in Focus, which undertook the Stockholm equestrian events with a similar approach. What’s kind of odd about it is that of its 60 minutes, 17 are concerned with an introduction of Melbourne and coverage of the Opening Ceremony, and another 7 are dedicated to the Closing Ceremony. While there are some vague attempts at storytelling in the opening segment, it’s not terribly compelling. The middle 36 minutes show a multitude of events (primarily focused on athletics) in rapid succession, with fast-paced narration. There are no titles to help the viewer along, and very few instances of scene-setting. It’s best used as a source of highlight clips, as watching it straight through is bewildering and feels a bit like a high-speed train passenger looking at a landscape through a pinhole camera.

LW: Honestly, I didn’t mind this format—it was easier to watch than the eight hours of silent film for Amsterdam. But it did lack the storytelling aspect I know you like.

The end of the film is somewhat touching, with a chorus performing a farewell song (with superimposed lyrics) at the Closing Ceremony as the athletes file out of Melbourne Cricket Ground.

But really, if you want to get a good feel for what Melbourne was like, skip this one and head straight for René Lucot’s far superior The Melbourne Rendez-vous.

Telling the Tale of a Games

Lucot’s film comes in at 106 minutes, and these additional 46 minutes are well-spent. This is a really enjoyable look at a host city introducing itself to the world stage. It’s objectively better in every way. The filming is better: it’s sharper, clearer, with better color. The narration features two narrators acting in roles similar to a modern broadcast team: one for the nuts-and-bolts play-by-play and one for the “color commentary” and storytelling. We get to spend a little bit of time with events, rather than being subjected to a succession of gun-to-finish highlights.

The film as included in the Criterion set is in French, with English subtitles. Interestingly enough, the production company also appears to have produced an English version, complete with English titles at the beginning and end of the film. This particular version is available to watch on Olympic Channel’s YouTube channel. We watched a little of Criterion’s original French version, and then all of the English version. As far as we saw they do match up, with only minimal translation differences. So if you want to watch this film (and you should!), you can choose from the two official Olympic languages! The YouTube version is the restored film, and it’s beautiful, though it does not approach the stunning quality of the Criterion Blu-ray.

Like Whitchurch’s film, Lucot spends a great deal of time on introductions and the Opening Ceremony. However, here it’s significantly more engaging. Australian Olympians Shirley Strickland, John Landy, and Charles Porter gaze skyward to the airplanes bringing the world to their doorstep. It’s a bit on-the-nose, but this little gimmick effectively gives the viewer the impression of Australian anticipation of the imminent international debut.

The tour of mid-1950s Melbourne’s immaculate suburbs, downtown, and countryside presents an idyllic picture of the setting, and it’s impossible not to get sucked into the feeling.

Throughout the film the athletic action is balanced with a variety of diversions and pauses. The men’s high jump, completed in darkness, leads to a look at the evening scene downtown. A trip to a zoo with a recurring pair of Singaporean athletes introduces Australia’s unique wildlife species. A submerged duckbill platypus gives way to a few underwater shots of the swimming races. In one curious scene, two Liberian athletes, done with their competitions, relax on a beach in their parade uniforms. There’s a fun and silly segment on judges and officials, complete with goofy music as the judges march in and out of the playing field.

LW: There were some really odd moments, though.

DW: Runners set their starting blocks, athletes wait around on the infield between their turns, officials go about their duties, and spectators watching the proceedings. This all contributes to the successful pacing of this film. There are very few moments where it drags, but it doesn’t force a viewer to try and keep up with the action.

Though there are no athlete interviews, the camera lingers around some of the featured personalities long enough, and with enough varying perspective, that we start to get to know them. Coupled with the great context provided by all the other bits, the viewer really feels like it’s been a full and illuminating visit to these Games.

There are a few recurring faces in this film; the stars of the Melbourne Games are well represented. Shirley Strickland gets her big wins in the 80-meter hurdles and the 4×100 relay, capping off a stunning 7-medal Olympic career. John Landy is upstaged by surprise winner Ron Delaney (IRL) in the tense 1500, which is shown start-to-finish. Bobby Morrow (USA) storms through the sprints, taking three golds. Emil Zátopek and his javelin-throwing wife Dana Zátopková hang out in the stands, and Alain Mimoun pops up repeatedly here and there, foreshadowing his marathon triumph. Betty Cuthbert (AUS) crushes everyone in the women’s sprints, mouth wide in her trademark frenzy. Jesse Owens watches from the seats as Greg Bell (USA) attempts to take away his last remaining world record.

Unsurprisingly, women get a double standard in this film. On the one hand, Cuthbert, Strickland, and a whole host of others are given significant screen time, their events treated with the same seriousness applied to most of the men’s events. Yet there’s some truly regrettable ogling by the camera paired with cringeworthy narration. The “formidable” Earlene Brown (USA) and “lovely girl” Jackie MacDonald (CAN) lead the cast in mistreatment. An absolutely dreadful sequence focuses on women athletes removing warm-up clothing before competing. What might have been a charming meet-cute at the women’s Village between Glenn Davis (USA) and an unnamed Italian athlete is ruined by a truly painful voiceover—“the girl’s Italian, but she’s pretty, and that’s international.” Sigh.

I was shocked to find Australian swimming sensation Dawn Fraser completely absent from Rendez-vous, though she does appear in a quick look at swimming in the Whitchurch film. And there is no mention of the legendary Hungarian-Soviet “Blood in the Water” water polo match. In fact, aquatics is barely seen at all, as rowing and sailing take up nearly all the waterborne screen time.

Whitchurch’s film at least alludes to the international situation surrounding Hungary, which had been experienced a revolution and then a Soviet invasion in the weeks prior. During the parade of athletes, the team is shown marching, while the narrator mentions that they were able to attend thanks to IOC “intervention.”

Hal Connolly (USA) and Olga Fikotova (CZE) appear in their gold medal performances, but their romance, which would seem to be a natural for the tone of this film, isn’t mentioned either (the couple, married after Melbourne, have an afternoon on the town in the Rome film).

As is traditional, the film closes with the men’s marathon. Now, we had a pretty good look at this race when we watched Alain Mimoun, the lovely little black-and-white docudrama about France’s great marathoner. With that in our back pocket, this film’s expanded coverage of the race has so much more meaning. There’s little narration compared to the rest of the film, but we know what to look for, and when Mimoun pulls away from the field, leaving the rest to seek the refreshment tables, it’s exciting.

LW: It’s also nice not to have background commentary on Alain ignoring his thirst because he just wants to win.

DW: Ha! [whispered, reverent voiceover] “Mimoun, treasure of the French Republic, one with the Gods, war hero, smiles through otherworldly suffering as his mortal competitors wilt and stop for tea.”

Interestingly enough, he really did ignore his thirst: Rendez-vous notes that he lost nine pounds during the race!

Of all the films we’ve seen so far here at Sprockets of Fire, this one is probably the most successful when it comes to the “being there” factor. It also happened to kick off a string of three really excellent films, followed by Rome 1960 and Tokyo 1964. This was truly a golden age in the intersection of sport and film.

Melbourne Rendez-vous certainly has its awkward moments, and it’s clearly a bit of a dual-purpose travel bureau film meant to introduce Australia to the world. But it’s significantly better than Olympic Games, 1956, beautifully shot, with variety and editing that result in great pacing. It’s fun to watch and we wish we could have been there to see these terrific athletes give it their all in such a pleasant environment. 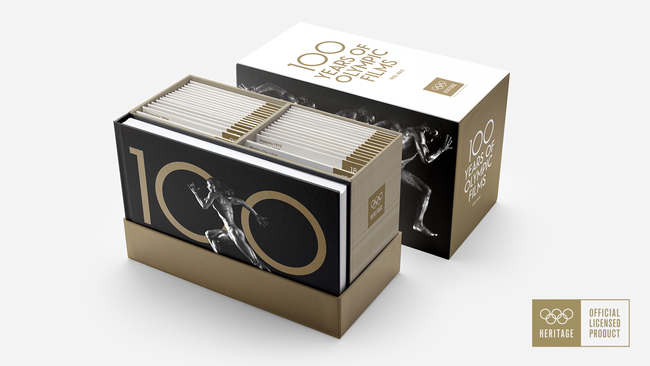 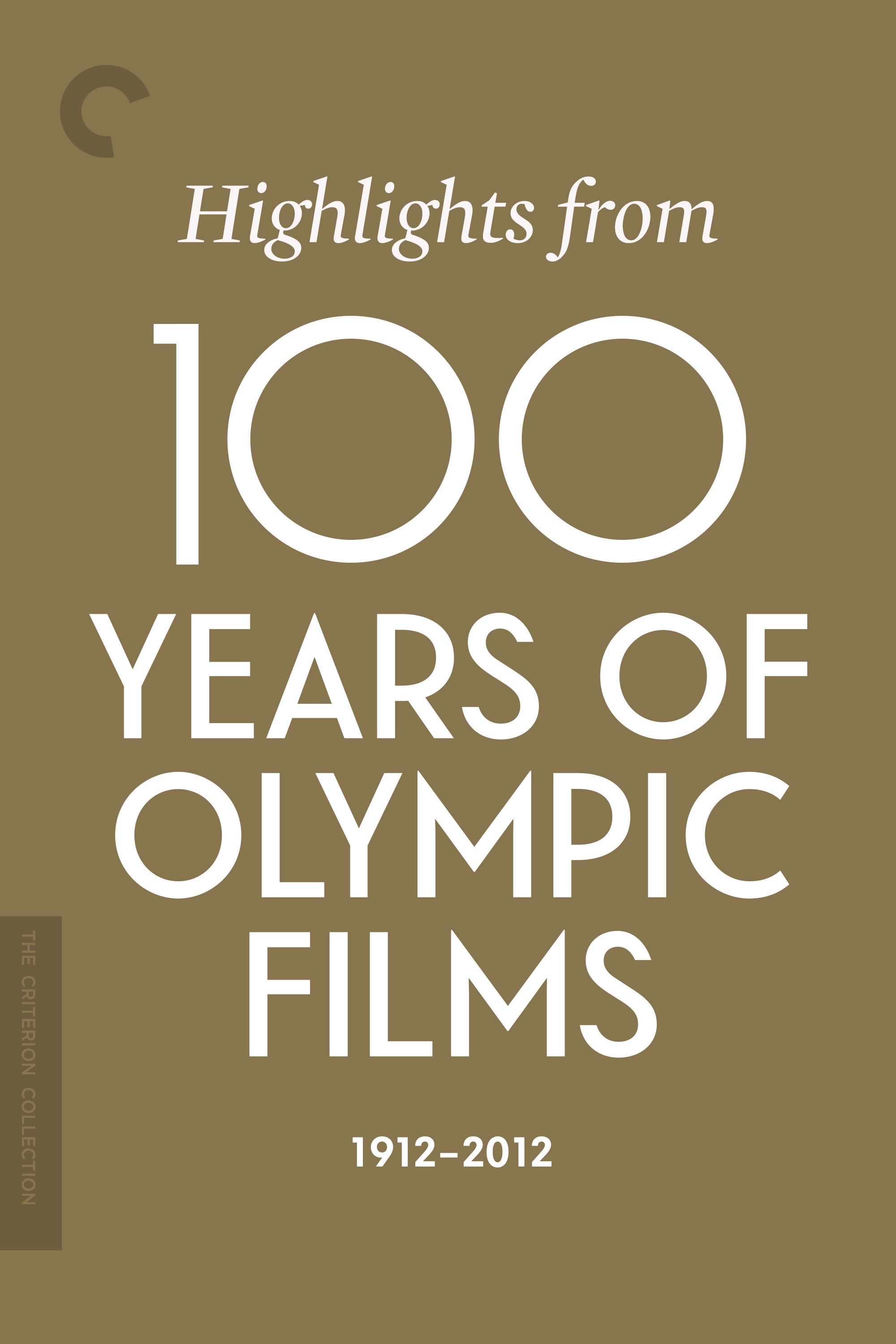