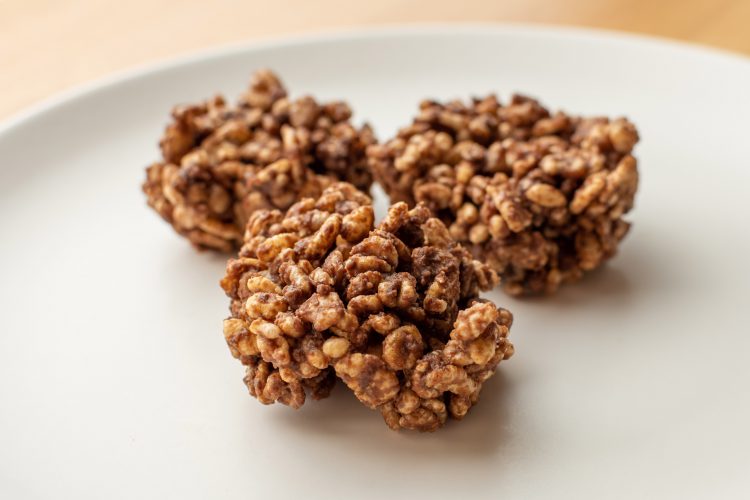 Round 2 for Australia and on the docket we have a traditional kid’s treat and yummy zucchini muffins. Let’s dive in!

LW: I started out making chocolate crackles, which are like rice crispy treats but with cocoa powder and sugar instead of marshmallows. Yeah, they are as good as they sound. Also much easier to clean up after, since there is no marshmallow stickiness!

DW: I’m intrigued by this. It feels fun and kid-centric, but the chocolate angle is new to me.

LW: There was one challenge I ran into early on—we don’t have copha here. Copha is a vegetable shortening made with coconut oil, so I suppose even if it did exist here I wouldn’t be able to use it. There aren’t any shortenings I can use, so it was time for an experiment!

There was every possibility this would absolutely fail, but it did not! I admit the crackles were a bit fragile, particularly when they were at room temperature, but they always tasted excellent. I would definitely make these again — they were so good!

DW: Whether they’re supposed to be crumbly or not, it was kind of a neat experience. There’s a lot of added texture when the crackles fall apart in your mouth. I enjoyed them!

LW: Truth time: I tried to make fairy bread as well, but it did not go right. Because fairy bread requires 100s and 1000s (think nonpareils) and I didn’t realize that until after the fact. Sigh. I now have an entire loaf of gluten free white bread in the freezer and no clue what to do with it. If my experiments suddenly skew towards things that require lots of bread crumbs, you’ll know why!

LW: Next up are honey olive oil zucchini muffins from Pinch of Yum again. I was in the mood for something slightly more savory than all of the cookies I’d been baking and these fit the bill!

Once again the muffins were super fluffy and tender. Like so fluffy it was hard to spread butter on them!

DW: I couldn’t believe how light and fluffy these were. I warmed one up with a little butter on top and it was quite nice.

LW: The recipe calls for them to be half whole wheat, but that obviously wouldn’t work for my allergy, so I gave buckwheat flour a shot instead. It was a bit of a strong flavor and overpowered the zucchini, so if I were to make these again, I might try millet flour instead. Overall the muffins were good, if a bit oily. There was a lot of olive oil in the muffins and I think I could have cut it in half. The muffins might have been a bit denser, but given how moist they were it might not be an issue!