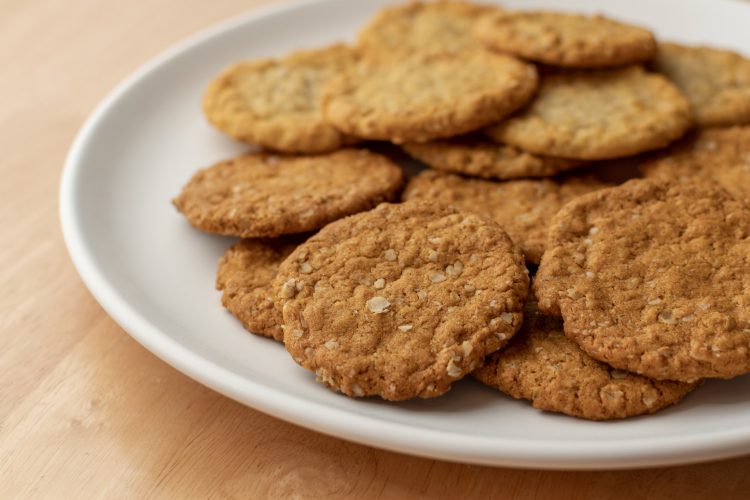 LW: Honestly, the best part of this blog is researching local baking (and cooking). I have spent a lot of hours looking at pictures of food these past months, and it is awesome. Australia did not disappoint when it came to baking options, though I quickly realized there would be a significant challenge: avoiding coconut. In the end, I decided to make Anzac biscuits without coconut, which I know means they aren’t really Anzac biscuits…but I didn’t want to die. It’s a cookie-filled blog today, as the second recipe is chocolate chocolate chip cookies that were out of this world!

DW: Australia is a place I’d really love to visit some day, and Anzac biscuits are something I’ve heard of. I’ve never tried them, however, so I’m really eager to experience this famous treat.

LW: Anzac stands for Australian and New Zealand Army Corps and these biscuits date back to World War I. They are hearty biscuits that I imagine would have shipped well during the war and are absolutely delicious. They are oat based, so I figured why not give them a go? We did have to hunt down some Lyle’s golden syrup at a local British store, and it was totally worth it. If you haven’t tried golden syrup, you should. It’s beautifully caramelay and I cannot wait to bake with it some more!

DW: I loved the British store. What a fun stop!

There are a ton of Anzac biscuit recipes out there, and they’re all nearly the same. I ended up using this recipe from Kylee Cooks with a few alterations.

DW: I can’t get over the old-fashioned Lyle’s tin packaging. I’m delighted the beautiful old look has survived for so long, and they clearly embrace it, with frequent limited edition packaging. OK, that’s enough design gushing.

LW: Now on to the color variation. The recipe called for baking the cookies 12 – 15 minutes, but at 10 minutes the cookies seemed to be getting really brown and there was a slightly bitter smell in the oven. You know the burning sugar smell? It was that. So I pulled them out and those are the dark biscuits on the left. The rest of the cookies I baked for 8 minutes and they were chewy, which was yummy but certainly not traditional. You couldn’t ship those cookies during war! Here’s the thing—the first day the lighter cookies were better, because they didn’t have the slightly bitter edge. But a few days later, the darker cookies were better. The bitterness faded and we were left with a crisp, sweet oat cookie that is so good.

These cookies made it to work and were promptly consumed and given the thumbs up. I will definitely make them again, perhaps a few days before I have to bring them anywhere, because they’re fantastic and so easy to make!

DW: These are so good. A little molasses sort of flavor, hearty, crunchy. Totally satisfying. They knew what they were doing when they made them.

LW: People. This next recipe is the closest I have come to a traditional cookie texture yet! Our kiddo asked for chocolate chocolate chip cookies as she was running out the door and I said yes, though I’ve never been a huge fan of chocolate cookies. But I am a HUGE FAN of these cookies.

I used a Food Network recipe this time around, which worked much better than the last one I used!

The replacements were simple…

I also used some Andes mint chips in half the cookies for Don and the kiddo, because they asked. I stayed away from those cookies!

LW: The cookies were simply to whip up and I learned my lesson from two weeks ago and hand mixed the butter and sugar, instead of using a mixer to cream them. It was definitely harder work, but worth it in the end as the cookie dough came together much more easily.

These cookies came out with crisp, buttery edges and a chewy middle. It’s the first time I’ve ever had one of my gluten free cookies come out with those buttery edges you get with a good chocolate chip cookie, and I can’t even put into words how happy it made me. They lost a bit of that crispness the next day, though they were still super yummy!