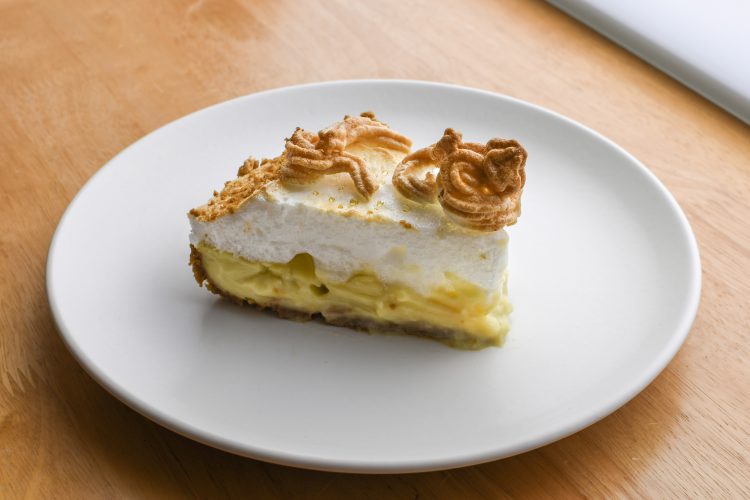 LW: Canada! I was super excited when I realized Canada was next, as I really wanted to look into traditional Canadian desserts. Then after doing research, I wanted to eat all of them. I settled on trying my hand at Flapper Pie and learned something new … I really can’t eat egg whites. Fun lesson! Also learned I should have chosen a different pie recipe. The second recipe went much smoother and I’d highly recommend the lemon blueberry bread!

DW: I’ve heard a great deal about poutine from the guys at the 5 Rings Podcast and wondered if maybe we ought to try it. But of course it’s basically 50% cheese, so you probably made the right choice!

LW: Flapper Pie is a custard pie with a graham cracker crust and crispy meringue top. It sounded amazing and simple to adjust (I’ve made dairy-free cream pies before), so why not try it? The end result was quite tasty, but it was definitely a bumpy road to get there.

Don’t you love the meringue piping? Our kiddo did it and had a great time. 🙂

There were a number of recipes out there and for some reason I chose this recipe from Food Network. This was an error in hindsight, as the recipe called for twice as much pie filling as the others I found and that meant the ratio of filling to crust was off. I caught this while filling the pie, however, so we just ended up with half the custard to eat later. If I make it again, I’d use this recipe from Food Bloggers of Canada, which seemed like a much more balanced recipe in hindsight.

Also, not going to lie, my meringue deflated as I was making it, because I wasn’t paying attention and added the sugar too quickly. The meringue was crispy on top when I pulled it out of the oven, but that was gone by the time I served it. (You need to refrigerate it for a couple hours so the custard sets up.) Oh well. It still tasted great, especially the graham cracker base. I’m a sucker for a graham cracker crust. We had friends over and the feedback was a thumbs up all around.

DW: Like a bobsled race, could you say the outcome of the meringue can be measured in hundredths of a second? I think you could!

This next recipe is my favorite to date—lemon blueberry bread from Pinch of Yum. I love the POY website and have been combing it for baking recipes to try that didn’t require too many replacements, and success! Honestly, if you like lemon bread, you MUST try this recipe.

DW: I approve this statement.

LW: The replacements were pretty easy this time. Here’s what I did…

Here’s a thing I’m beginning to notice with the vegan butter—it separates when you cream together the butter and the sugar, rather than fully combining so you can whip in a lot of air. Maybe this made the bread more dense? I suppose I’d have to try it again with butter and flour to know, but that just seems silly. I’m done baking things I can’t eat. 🙂

In any event, the bread was amazingly light and fluffy with a crunchy top and the best lemon flavor. We ate half the bread in the two hours after it came out of the oven, and I had to sneak out with a slice for my coworkers. Once again, people didn’t think it was gluten free!