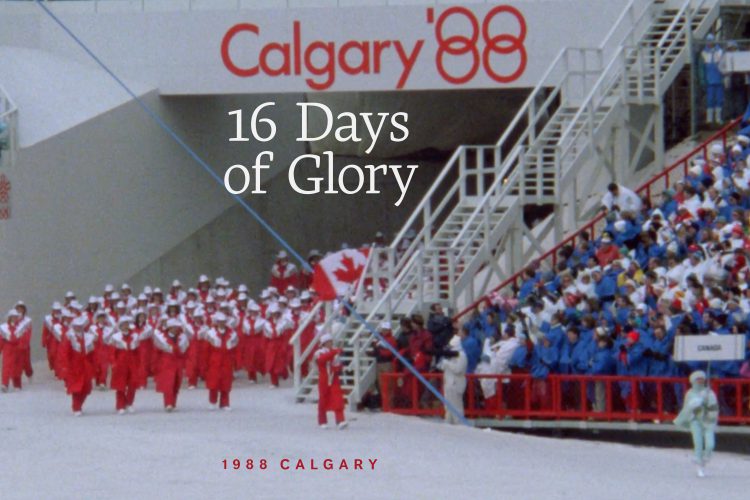 After Bud Greenspan’s success in filming the 1984 Los Angeles Games, he turned his attentions to the XV Olympic Winter Games. Calgary ’88: 16 Days of Glory is the second milestone in the Greenspan catalog. As a child, Calgary was really the first Games I was fully aware of, and I followed the events closely. Now I’m excited to reminisce and discover a few stories I didn’t grasp at the time.

Forgotten, but Not Gone

Long after the Calgary cauldron was extinguished, and the world records set there were surpassed, these Winter Games are mostly known to the wider world for two things: the Jamaican bobsled team and Eddie “The Eagle” Edwards (GBR). But except for a couple of moments where members of the bobsled team are in the background, and one blink-and-you’ll-miss-it shot of the two-man bob getting a little sideways in the run, both of these memorable players go completely unmentioned.

Despite what we know about Greenspan and the earnestness with which his films approach the subject of competition, I was still a little surprised not to see a tiny bit more. Both Edwards and the Jamaicans were essentially curiosities without any hope of contending, but generally their stories are told from the perspective of the Olympic Spirit, alive within them, compelling them to give their very best despite all the obstacles in their paths.

LW: I agree, I definitely thought we’d see the Jamaicans!

DW: After this minor letdown, I’m going to be on the lookout for Eric “The Eel” Moussambani in Greenspan’s film of Sydney 2000.

Italy’s Alberto Tomba only appears briefly in a short montage on alpine skiing. Tragic speed skater Dan Jansen isn’t shown at all, though his absence from this film is mainly notable in restrospect.

On the positive side, we were excited to see our old friend Maurilio De Zolt (ITA) take the silver in the 50km cross-country skiing coverage.

The other totally unexpected moment was a single clip of a Paralympic skier in a speed-focused montage. This quick moment is a doorway to an interesting side investigation into the state of winter Paralympic sport in 1988. That year the Paralympic Winter Games happened in Innsbruck, not Calgary, the last time they were held at a different location. At Calgary there were several demonstration sports under the banner of “disabled skiing:” a cross-country event and a giant slalom, for both men and women. I was delighted to see it appear, and now I’m curious what other Paralympic references appear in the rest of these films. Thanks to Bill Mallon and Hilary Evans for helping identify the skier as Guy Amalfitano (FRA), who competed at both Calgary and Innsbruck that year!

The Battle of the Brians

The most in-depth piece in the entire film is the massive figure skating showdown between Brian Orser (CAN) and Brian Boitano (USA). We can usually rely on Greenspan to hit the marquee events pretty hard, and boy, does this one get hit hard. It’s nearly a half hour all by itself! Ages go by while we watch the two Brians stalking the backstage tunnels in Calgary’s Saddledome. Both men’s coaches offer deep reflections on how they support their athletes in these raw final moments before competition. Coverage of the actual skating is excellent, too, and those memorable costumes look as spectacular as we remember them. Orser and Boitano provide excellent interviews, their in-the-moment recounting of events comparable to the Carl Lewis segments from Los Angeles four years earlier.

The drama of the competition may be a little overplayed, and Greenspan probably could have edited it a tad more aggressively, but it does a superlative job injecting the viewer directly into the event. Seeing all the goings-on in the arena itself is a rare treat. Boitano tells the story of how teammate Christopher Bowman wordlessly told him he had won, and we see Bowman rush off to do it. I’m not sure we’ve seen a more comprehensive segment yet. This one gets a gold medal in the “being there” department.

The most emotional part of the film takes place almost right out of the gates. After the Torch Relay, the Opening Ceremony, and a stirring aerial performance from the Royal Canadian Air Force’s Snowbirds demonstration team, we are transported to a quiet, empty Olympic Oval. Canada’s defending 1,500-meter speed skating champion, Gaétan Boucher, warms up. There are the usual interviews with Boucher and his parents, plus a look back at his performances in Lake Placid and Sarajevo.

Back in Calgary, records are set and broken. Boucher skates in the 15th pair. Halfway through his race, he leads, but begins to falter. Greenspan cuts back and forth between Boucher and his parents in the stands, and we feel all the stress and emotion of the moment as Boucher finishes ninth.

His final race complete, he lingers on the oval, leaving only when the medal ceremony is about to start. Greenspan’s camera follows him down the steps and through the tunnels, finally reaching the locker room door. All the while the film jumps between the medal ceremony and Boucher’s parents in the stands, as the endless and bombastic East German anthem echoes through the arena. There is no narration here. It’s heartbreaking, and it’s the right choice.

Just before the Closing Ceremony, another lengthy segment on figure skating focuses on the historic win by Katarina Witt (GDR), the first repeat champion since Sonja Henie. After Canada’s Elizabeth Manley skates, it’s down to Debi Thomas (USA). We overhear Thomas’s coach Alex McGowan explain what she must do to win. And then, for over seven minutes, from the start of her routine until the medal ceremony, there is no narration, no music. Only the ambient noise in the arena, and the overheard comments backstage. The story simply plays out in front of us, as if we were there ourselves.

It’s a shockingly powerful portrayal of a pivotal moment in the lives of everyone involved. Only when it’s all over do we realize how unusual the segment was. Even that same East German anthem feels somehow different in this context.

Speaking of East Germans, Dietmar Schauerhammer is featured in the bobsled segment, which, as mentioned, stiffs the Jamaicans. Anyway, there’s a fun little history-of-bobsled section, full of all sorts of great archival action. I was amused to see footage of Billy Fiske (USA) from St Moritz 1928 and Lake Placid 1932. There’s an excellent book on Billy and the early bobsled scene called Speed Kings. (We’ll mention a bit more about the book, and Billy, when we get to the St Moritz film.) There’s also a shot of boxing from Antwerp 1920 to mention Fiske’s teammate Eddie Eagan, who won his first gold medal in that summer meeting.

I Guess We Have to Keep Mentioning This

There were 1,222 male athletes at Calgary, and 301 women. This film features just two segments on women’s events (speed skating, with a Bonnie Blair sighting; and figure skating), and seven on men’s events. I think it’s useful to see just how very recent the major shift to a more balanced program has been. For instance, at Pyeongchang there were 1,680 men and 1,242 women. Still a ways to go, but we’re getting there.

LW: This definitely struck me, given how long it took to arrive at a women’s event in the film. I had to finally ask if there were any at all.

DW: This is a fun look at the Calgary 1988 Games. There are a few standout segments (Boucher and both figure skating events) and the film is classic Greenspan: engaging, thorough, with an excellent mix of interviews, action, and all the little bits of texture around the competitions. There’s not really much here if you’re looking to see what it might have felt like to be in Calgary, but a viewer definitely feels like they’ve been in the thick of the competitions. Impressive on their own merits, Greenspan makes these athletes and their efforts truly memorable.

Note this is an unrestored version, not the Criterion release.

It would be remiss not to mention the two feature films that came out of the Calgary Games, though the athletes in question are not featured in the official film: Cool Runnings (1993), based on the Jamaican bobsled team; and more recently Eddie the Eagle (2016), based on the infamous British ski jumper, Eddie Edwards.