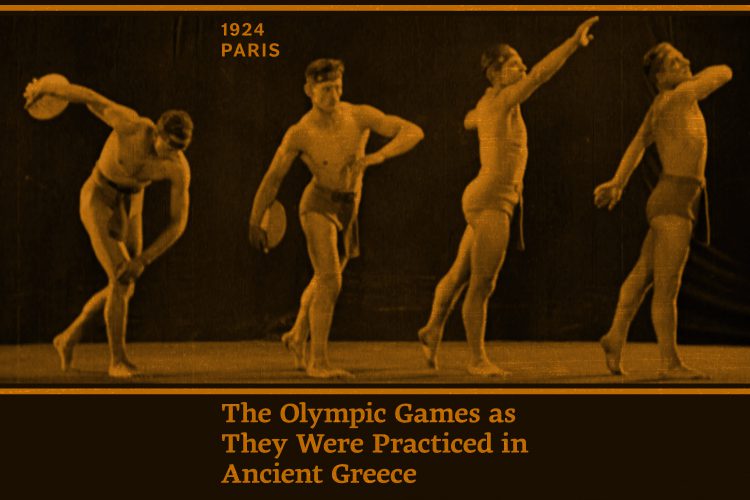 One of the intriguing things about the Criterion box set is the inclusion of multiple films for certain Games. It’s sort of the equivalent of extras & deleted scenes on a physical DVD! As it turns out, several Summer and Winter editions had more than one official film, and Paris 1924 was the earliest example of this.

Director Jean de Rovera helmed the main films of both Olympic Games hosted by France in 1924 (Chamonix & Paris). Additionally, he made an odd little short to help introduce contemporary audiences to the historical origins of this curious new sporting ritual. Just like the main films, it is of course a silent film, accompanied by a piano score from Donald Sosin. And fortunately for us, it really is short, coming in at only eight minutes!

DW: This is a really weird little piece of sport film. The idea, I surmise, was to demonstrate what the ancient Greeks actually did at those mythical Games in Olympia. Criterion’s book describes it, but does not delve into intentions, and nor is it mentioned anywhere in the official report of the 1924 Games, even in the short section that mentions the two main films.

So we are left to just guess, and we guess it’s just a little novelty to help build the myth and legend that undergirds the entire modern Olympic Movement. And it’s fairly amusing, especially from a modern-day outlook.

Basically, it’s a stage presentation of all the athletic scenes portrayed on ancient pottery. Athletes from l’École de Joinville demonstrate a series of sporting events: discus, javelin, running, and archery. But the ancient Games featured a lot of combat sport as well, and so the stage presents wrestling and even “fighting with weapons,” which is decidedly not fencing.

LW: Honestly, this was the best and weirdest thing to watch. Also: I am very glad they did not fully recreate the pottery scenes. If you know what I mean.

DW: The centerpiece of this cheerful little short is the brutal pankration event. Pankration was apparently a combat event comprised of a mix of wrestling and boxing; as depicted here it basically looks like a two-man brawl (though a highly stylized and choreographed brawl). It is introduced with three static vignettes of competitors choking, beating, and throwing each other. Fun and games!

The screen fades to black, and the lights go up on two dramatically-lit competitors entering the arena in full motion. They salute the gods, and then each other, and then begin their ritual of man-to-man combat. Despite the theatrical staging, the action is presented in a mix of full-speed and slow-motion footage. The two men move across the stage in classically choreographed moves. It’s like a dance, and clearly displays their athleticism.

It finally ends with one combatant throwing the other to the ground from above his head. At this moment the victor receives a vision of Nike, the Goddess of Victory (I am inferring here, as it’s not stated explicitly). She wears heavy makeup and curls, looking exactly like you’d expect in 1924. Surrounded by two blurry companions, she appears to proclaim her satisfaction and bestow a blessing upon the champion, who then salutes his gods in triumph, foot upon his vanquished opponent.

The portrayal of these sports looks exactly like the artifacts we’ve all seen, going so far as to show multiple athletes holding poses next to each other to demonstrate sequential movements. Mostly they’re static scenes on stage, which is why they look so much like the ancient art they’re so clearly based on.

None of it is remotely convincing in terms of historical accuracy, though the actors do match the source material (paint on really old pottery) quite well. However, the poses and action is so stylized that it’s simply not believable as a demonstration, so it’s hard to conceive of it being meant literally. Compared with the dynamic, forceful action of the contemporary discus throwers seen in the main Paris 1924 film, the ancient discus thrower is portrayed with measured grace. If ancient athletes threw their implements so gently, their minds would surely be boggled by the whirling cyclone of the modern thrower.

Anyway, this is a fun little window into the era’s reverence for ancient civilizations, and is an interesting study into physicality and classical forms. Plus, it’s really short!

The Getty Museum has an interesting background piece on the Ancient Games, with plenty of ancient artifacts.