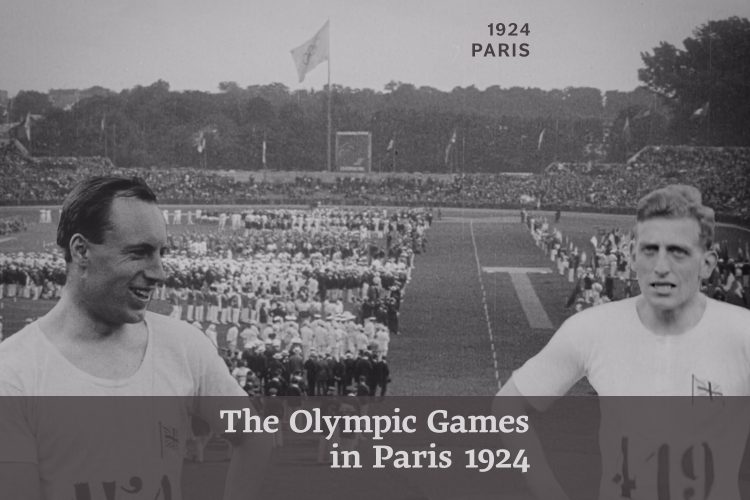 Ah, Paris in the summertime! The Olympic Games returned to the French capital in 1924. Having previously hosted the second Games in 1900, Paris became the first city to organize the event twice.

Like the Chamonix winter film produced earlier in the year, the silent, black & white Paris film was directed by Jean de Rovera. This Criterion release (reconstructed and restored) features some excellent music to accompany the visuals. Of the silent films we’ve discussed, this is probably the best audio effort so far. Despite a length of 174 minutes, Donald Sosin’s piano score keeps the action moving forward, pairing delightfully with a number of the events. There’s a slow ragtime for hammer throw, and some totally unexpected and really effective percussion for the punishing team cross-country race.

The editing of this silent film resulted in a far more engaging experience than, say, both Amsterdam 1928 films. It’s certainly still closer to an academic archive than the modern films, but de Rovera clearly recognized he didn’t need to show every javelin thrower or swimming race. There are omissions and some segments should have been cut more aggressively, but overall this film is pretty watchable. Again, the superior music does help.

LW: I’m going to point out Don’s bias here. The music matches what he hears in his head 24/7, so of course it made him happy. Chamonix was definitely more watchable, but this still felt … slow.

The film opens with, fittingly, the Opening Ceremony. A festive atmosphere at the stadium in Colombes that welcomes the athletes. The weather looks wonderful, even in grayscale, and in addition to the carrier pigeons of peace that are released, a wide range of dignitaries are on hand including the Prince of Wales (later to be King until abdicating; for a dramatic retelling, go watch The Crown, season 1) and the one who started all of this, Pierre de Coubertin. Gaston Doumergue, president of the French Republic, declares the Games open. It’s all quite uplifting and, of course, set to some delightful marching band-style piano. There’s even an airplane flyby!

There are also plenty of female athletes in the parade. Spoiler alert: we’re not going to see the vast majority of their events in the film.

The earliest sport montage we’ve seen yet immediately follows the Ceremony, and it’s worth mentioning because it’s an actual attempt at editorial storytelling. We haven’t seen that in this way from the silent era to this point. A title card talks about athletic courage, and then a Swedish cross-country runner [either Sven Thuresson or Sidon Ebeling] runs out of steam on a small incline, falls down the hill, and is helped up by officials. Agility is a pole vaulter showing great form, strength the Swedish hammer thrower Ossian Skiöld, discipline the Danish gymnastics team. Olympic ideals, already present and venerated at the Games of the VIII Olympiad.

Most of the sport coverage is pretty standard for the age. There’s slow-motion used here and there, but very few really interesting angles or adventurous presentations. The key thing is the editing. While by no means a collection of SportsCenter highlights, the film really does move along in comparison to other films of the era.

DW: Well, yeah, I mean it’s no Marvel movie, but it’s all relative.

The Flying Finns, Paavo Nurmi and Ville Ritola, are everywhere on the track. Nurmi is in the middle of his reign over the distance events (5 golds in Paris), and Ritola makes a triumphant debut (4 golds, 2 silvers). Again and again in the film we see the two of them leading packs and winning races. That story comes through very clearly.

There’s a weird diversion from the rest of the film in a few places: title cards include little silhouettes of athletes crossing a finish line, clearing a bar, and leaping into a pit. It looks like a little experiment that was quickly abandoned, as it’s only those for the 10,000, high jump, and long jump. Delightfully odd.

Johnny Weissmuller, aka Tarzan, makes his Olympic debut, but aquatics events do not work well with black & white film, so we can only guess what lane he’s in. We’ll just have to wait for color film to get a better look at the sport. The pool constructed for 1924 still exists and is open to the public, so if you’re ever in the neighborhood, pop in and let us know if the water is blue or gray.

Gymnastics, shown so poorly in the Amsterdam films, gets a far better presentation here. Similarities with the modern sport are on display in parallel bars, pommel horse, horizontal bar, and rings. Vault is totally different, though old-timers like us recognize the old-style horse. (We were surprised to see the vaulter clearing a bar before hitting the horse.) Then the old format fully takes over and there’s rope-climbing and a way-too-long look at what I’m calling the synchronized team calisthenics event, full of inadvisable forced stretching maneuvers.

LW: This part scared the heck out of me—their form was so poor at times! How did no one get hurt?

DW: The football final between Uruguay and Switzerland is surprisingly exciting, despite being really long. Usually in these silent films the team sports suffer more than most. But here, maybe due to a variety of camera angles, pretty decent editing and, again, the music, the game is really watchable. The Uruguayan keeper, Andrés Mazali, apparently had so little to do in this victory that he’s caught mugging for the camera while in goal. It’s a fun, very human moment that helps us remember that these people, in a totally different time, were pretty much the same as us.

But oh God, the sailing.

LW: Let’s not discuss the sailing. Also, wouldn’t recommend watching this part if you get motion sick. Also also, camera stabilization is a wonderful invention.

DW: Okay, seconded. I’m making a big deal about editing in this film, but here they blew it. The entire segment should have been cut. I think instead we’ll just show some representational screen grabs of the action. Here you go:

I was surprised that the film closes with boxing. There are three fights shown, a totally undisciplined brawl between William Smith (South Africa) and Salvatore Tripoli (USA), an unremarkable heavyweight bout, and then the flyweight scrap between James McKenzie (GBR) and Fidel La Barba (USA). After pummeling each other, the two embrace and congratulate each other with great enthusiasm. It’s a wonderful way for the competition to wrap up.

And then the film ends. Which is a little weird, but at least the last shot was so joyous! The moment’s warmth reminds me a little of the montages we see on television after the Closing Ceremony.

Of course, Paris 1924 is now most famous for having inspired the Academy Award-winning film Chariots of Fire. While somewhat fictionalized, it does indeed include real characters and events from these Games, and the real-life athletes are present in the official film. Harold Abrahams’ furious victory in the 100 meter finals is here, and he also shows up in the 4×100 relay.

Eric Liddell’s great 400 win is featured, and we see not only his unorthodox style but also his position in the outer lane: “I don’t expect I’ll see you ’til after the race.” (I don’t see any note from Jackson Scholz in his hand, though.) He also makes an unmentioned appearance in the 200 final, taking bronze behind convincing finishes by Scholz and Charles Paddock, he of the finishing leap.

Evelyn Aubrey Montague, who crashes badly in the movie’s steeplechase, leaps safely over the water barrier here. He finished sixth behind our friend Ville Ritola.

Of the four main characters, only “Lord Lindsay” (Lord Burghley in real life) doesn’t appear in this film. The 110 hurdles final is shown, but Burghley finished third in heat 8, and thus didn’t make the final in Paris. He actually won his gold in the 400 hurdles at Amsterdam, and you can see it happen if you want to wade through the Luce version of that Games.

There’s even a moment with the Prince of Wales on the infield talking to athletes that’s reminiscent of the Chariots scene where he wishes Abrahams good luck (so to speak) before the 100 final.

Abrahams became an important figure in British athletics, and Burghley, by then Marquess of Exeter, was present for another iconic event in Olympic history much later in life. Having seen Chariots of Fire so many times, it was really fun to look for these legends in this film.

Our friends at Olympic Fever have a movie club episode out this week on Chariots of Fire. Give it a listen!

Paris was something of a hodgepodge of cultural & demonstration (baseball!) events, and several sports were endangered. We see some pretty good tennis action (American sweep; dropped until Seoul ’88), excellent rugby coverage with terrific music and loads of injuries (dropped until Sevens at Rio 2016), and even polo (skipped in ’28 & ’32, held one last time in 1936). It’s nice that we get to see these here.

The Olympic Games will return to Paris for the third time in 2024, a hundred years after the events shown in this film. For that reason alone this is worth watching, but there are plenty of others, including the Chariots of Fire connections. 1924’s main stadium at Colombes still stands and is currently slated to host field hockey in 2024. Before then, spend a few hours on a rainy day to enjoy sport as it once was, to see how far we’ve come when tomorrow’s competitions take place on yesterday’s fields.

The IOC has a couple of pieces on Paris 1924 and the Chariots of Fire story on their website, with some nice photos and video clips of unrestored footage:

THE STORY OF ABRAHAMS AND LIDDELL AT PARIS 1924