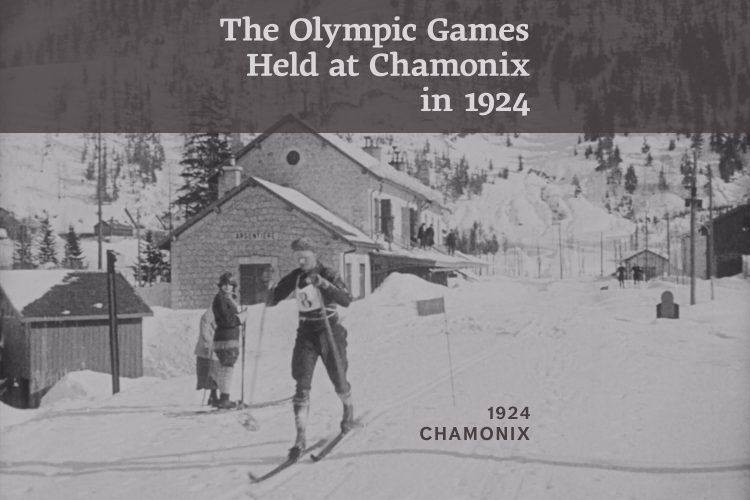 The very first Winter Olympic Games were held in 1924 at the French resort of Chamonix. Amid the peaceful prosperity of the post-war years, leisure time had expanded. Winter sport had become a growing obsession, and in 1921 the IOC decided to formally recognize the cold-weather sports world. An inaugural “International Week of Winter Sport” was declared for 1924 in Chamonix. The event would prove to be such a success that it became an official Olympic Games, kicking off a tradition that continues today.

But at the time it was just a light-hearted week of winter sports competition in a French resort town. A film was commissioned in conjunction with the summer Games that would be held later that year in Paris. Directed by Jean de Rovera for Rapid-Film, The Olympic Games Held at Chamonix in 1924 is silent, black-and-white, and brisk at 37 minutes. It’s very watchable and provides a fun and fascinating look back at the dawn of winter sport.

EW: It really was such an enjoyable film to watch!

DW: There’s something really charming about a bunch of top athletes carrying their equipment through village streets thick with spectators, and that’s where the film opens. Bobsledders are dragged along on their sleds; curling squads, dressed to impress in three-piece suits and shouldering brooms with rifles; hockey players with their skates and sticks; all walking through the village toward the stadium in national uniforms with mobs of onlookers cheering them along.

The parade gives way to a relatively informal-feeling athletes’ oath, and then we’re straight onto competitions.

The Chamonix Games consisted of mostly familiar events: bobsled, speed & figure skating, ice hockey, cross-country skiing, ski jumping, and nordic combined. A pair of events were notable for their subsequent status: curling would vanish from the Olympic program until 1998; and military patrol became a demonstration sport in 1928, 1936, and 1948 before evolving into biathlon, which debuted in 1960 at Squaw Valley. All of these events except curling appear in the film.

EW: This is really unfortunate, because I would have loved to see an early version of curling!

DW: For sure. I’d really like to see those house-brooms in action on a curling sheet, too. They must have required a completely different technique.

The figure skating segment features the women’s and pairs competition, and also shows the judges inspecting the skaters’ marks on the ice. The future three-time champion Sonja Henie (NOR), who finished dead last as an 11-year-old in Chamonix, gets a little cameo at the end of the segment, with an amazingly prescient introduction. Unfortunately the men’s singles is skipped completely, which deprives us of the odd delight of seeing Gillis Grafström (SWE) defend his gold medal from the 1920 Summer Games in Antwerp! He was successful, and won again four years later in St Moritz.

Ice hockey was also held at the summer Antwerp Games (won by Canada), and appears here in mostly incomprehensible—but absolutely breathless—coverage of the Canadian 6-1 triumph over the US. It’s clear that the sport is still something of a curiosity, with purpose-shot introductions of a puck and hockey stick to help the audience understand the game a bit. The two teams are introduced and then the action begins, set to a frenetic piano score (added in the Criterion release, of course). At this early stage there are definitely some technical constraints that hinder the coverage a bit, from cameras struggling to keep up with the action to ice glare. If only they had FoxTrax in 1924!

The filmmakers’ technical capabilities were up to the challenge for bobsled, however, and the daredevils of the sport are fun to watch careening around corners, barely hanging on to their rudimentary sleds. Today’s sport looks exponentially safer.

As usual with winter films, cross-country skiing is a focus, with cameras set up all through the course. In those days the race was a true cross-country event, and we do get to see the “runners” working their way across the landscape, with a checkpoint at the Église Saint-Pierre d’Argentière (link in French) along the Arve. Like everything else in this film, it’s a short segment, but it’s effective in describing the event.

A lengthy look at ski jumping closes the film, with many viewpoints of these extremely daring athletes soaring through the air. The coverage of the event is not great but the thrilling danger of it is evident, with multiple crashes. The spectators appear to be having a ball, while Jacob Thams (NOR) and his fellow victors appear somewhat relieved to have survived the ordeal in one piece.

The Olympic Games Held at Chamonix in 1924 is a quick and lightweight look at the origins of what has grown into a massive spectacle. Watching today’s sport it is amazing to see how humble the event was at its inception. Despite that, the determination and skill of every athlete who competed is evident. Given how accustomed we’ve become to robust facilities and expertly groomed conditions, I find it really helpful to see how it all began. It’s reassuring to remember that world-class sport was once conducted with so much less of everything. In an era of exorbitant and prohibitive costs, to both hosts and athletes, perhaps we can still find a way to dial back a bit and keep the soul of competition alive.

If you’re curious about the beginning of winter sport, or would like to see what a silent sport film is like without committing to five hours, this half-hour time capsule is a great place to start.