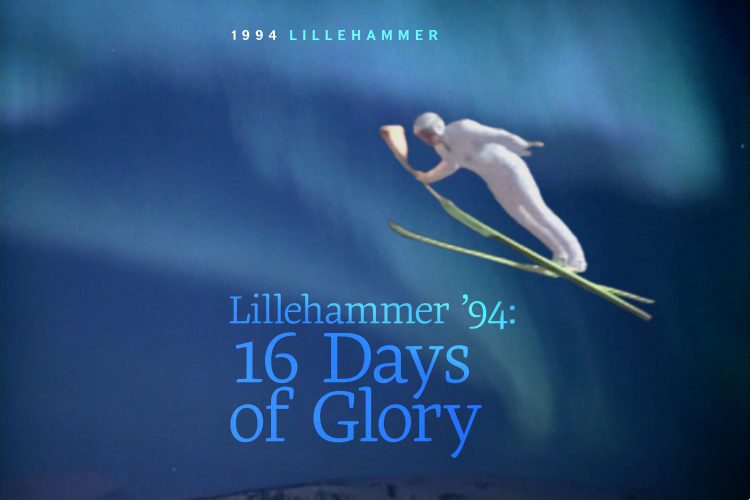 In 1994 the Olympic Movement made a major change and shifted schedules, alternating between the Summer and Winter Games every two years. The small Norwegian village of Lillehammer was the host for this first staggered edition of the Winter Games, coming 24 months after Albertville, France had its own moment in the snow.

This offered an opportunity to remember the 1984 host, Sarajevo, which was by this point deep into the chaos of the Bosnian war. At the time of Lillehammer’s Opening Ceremony, that war was entering a crucial phase which saw the start of NATO’s active involvement. The venues of 1984 were destroyed, great achievements mere memories.

10 years after what the 1984 official film called Sarajevo’s “Turning Point,” IOC President Juan Antonio Samaranch called for a moment of silence, and Olympic mainstay Bud Greenspan was there to capture the poignant tribute in his third outing.

Lillehammer ’94 is remembered for a few great performances but also for a really special feeling that surrounded and imbued the proceedings. Hard to put a finger on, the Lillehammer magic colors memories of those 16 days with a warm fondness. We were excited to see if this film could recapture that feeling.

The Greenspan formula delivers some excellent segments, as always. For me the key segment is the touching Dan Jansen (USA) saga, with his full story told from Sarajevo through Lillehammer, closing with his poignant victory lap on the track in Hamar with his infant daughter Jane.

Johann Olav Koss (NOR) thrilled the home crowd with his incredible triple world record performance, and here he delivers a great interview. Koss famously donated some of his medal bonus to Olympic Aid, an initiative to support youth in Sarajevo, further connecting Lillehammer with the ’84 Winter Games. (Olympic Aid later became Right to Play, of which Koss was a founding member.) All the cross-country events are covered well, and the back-and-forth rivalry between Lyubov Yegorova (RUS) and Manuela Di Centa (ITA) is exciting. Maurilio de Zolt and Alberto Tomba have some fun pieces for Italy, and Bonnie Blair (USA)—who won two golds and was a sensation back home—has the final act in the film, but it’s really the Jansen story that gets the spotlight.

The ski jumping competitions have some particularly good camerawork. Through a combination of top-to-bottom tracking and sequential efforts, it’s immediately clear when a jump is long. This is not always so effectively conveyed when covering ski jumping, but Greenspan has it figured out. Possibly my favorite shot from the whole film is one of Espen Bredesen (NOR) reclining in a chair lift after his first jump in the K120 event, a sea of Norwegian supporters waving flags behind him.

Cross-country skiing at Lillehammer featured a course that wound through the woods and was lined with fans, many of whom had camped out for days to secure a spot, building campfires and playing traditional music. Greenspan’s crew captures the energy during the race; it feels like the Tour de France. Several competitors discuss it in their interviews, and it adds life to the film.

LW: It amazes me that people would camp out to watch cross-country skiing. That would not happen in the US! Also I completely agree, it felt just like the Tour.

A Casualty of Focus

DW: This theme of popular Norwegian support for the Games pops up throughout the film, which adds a lot of atmosphere. The Greenspan formula sometimes focuses so narrowly on the featured competitor that the wider scope of the Games can be missed. But when the camera shows the fans, waving their omnipresent red-white-and-blue Norwegian flags, singing and cheering, the viewer gets a chance to step back for just a moment and imagine the scale of it all.

However, the film never really manages to convey the legendary “magic” of the Lillehammer Games. I recall nightly images of general revelry on the Storgata during the CBS broadcasts here in the US, and that doesn’t show up here. (Granted, I wouldn’t expect Letterman’s mom to appear, and CBS did have its savage critics.) The sort of detached, almost clinical focus on events and interviews does seem to miss the big picture, despite multiple references to Sarajevo and the film’s closing thesis: “For 16 days in February, this world was a better place.”

It’s true: that’s how it always feels during the Games, but we’ve yet to see a film that really shows it. It’s one thing to say it, and offer glimpses of the passion and celebration around the events, but I think we’re still missing half the story.

Oddly, the restoration project undertaken for most of the films in the box set is not extended to those targeted for television distribution. It’s such a shame: this film looks like a worn-out VHS tape in comparison to the ancient, gloriously restored films we’ve seen so far. Even Greenspan’s first outing, LA’s 16 Days of Glory, looks alive and present after the Criterion treatment.

It’s clear that Lillehammer was shot with care, and there are some great visuals. They just don’t deliver the impact they could. The video transfer production process, rather than an output to film like a cinematic release, is apparently a dead-end for future-proofing. I imagine the original footage was clear and beautiful, but the entire film would have to be re-assembled from those sources. I don’t hold out much hope for the rest of Greenspan’s following films, and that’s disappointing.

LW: I think you’ve forgotten the most important part of the ’94 Games: Nancy & Tonya.

DW: Well: Greenspan is unsympathetic to Harding. Mostly we see her free program meltdown when her lace breaks. And that’s about it for that; the film makes her look small, and Kerrigan brave and triumphant in her silver medal performance.

LW: Definitely agree. I also admit I thought Kerrigan was robbed of gold at the time, but re-watching her performance and Baiul’s changed my opinion.

DW: Yes, there’s a better story in Ukraine’s Oksana Baiul, and that’s the one Greenspan tells. Come for Tonya & Nancy, stay for Oksana’s victory over tragedy. Oh! Katarina Witt plus Torvill & Dean: the sensations of Sarajevo (there’s ’84 again) staged comebacks and they get their second moments in the sun here, affectionately portrayed.

By comparison, the love-fest for everybody else makes it pretty clear where Greenspan stands on the Kerrigan-Harding saga.

This is a good Olympic film of a great Olympic Winter Games. It’s probably a little longer than necessary (three-plus hours feels overindulgent for the more compact winter event). I really wish it got a full restoration treatment, but it is an effective time capsule of production methods (which is explicitly part of the goal of the joint IOC-Criterion project).

For me, the Lillehammer magic isn’t captured well; the strategy of employing a similar formula for each Games does create a sense of sameness, which is unfortunate. Perhaps the special feeling that unfolded here was unanticipated, and filming plans made it difficult to adjust. It seems the plan was to focus on the athletes’ experiences and the Sarajevo anniversary, and unassuming Lillehammer got a little lost in the shuffle.

Whatever the case, there are some great stories told, and we’re fortunate to get to know some of these incredible athletes a little better. Hearing about their own struggles, in their own words, makes their successes all the more remarkable. This is where the Greenspan approach shines.