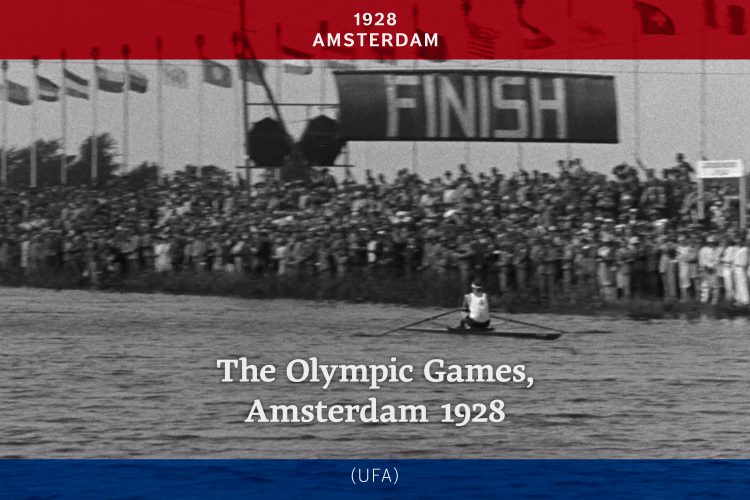 As discussed last time, there are two official films associated with the 1928 Amsterdam Games. Aside from documenting sporting achievements, together this pair of silent films seems to represent an important split between recording and storytelling in sports documentaries. Until now the genre seemed mostly concerned with archive creation.

In UFA’s recut presentation, we immediately see the benefits of careful editing. Director Wilhelm Prager gave real thought to presentation, and those of us slogging through his 192 minutes today salute him!

LW: I’ll just add that I did not realize how long seven hours of silent film would feel. Unless you are super in love with the Olympics (or your husband 🙂 ), I’d recommend just watching this film.

A Patchwork of Restoration

This film is described in the Criterion book as having been restored from separate reels and film fragments, and it shows. The men’s 4×100 relay is a great example of this, seamlessly switching from the pristine Luce restoration to a degraded but restored print of the UFA film.

The effect is actually quite thought-provoking. It’s easy to start thinking about what the physical copies of this film must have gone through in 90 years of European history, and what a miracle it is that any of it still exists. And then marvel at how clear so much of it is, perhaps clearer now than it ever looked to contemporary audiences viewing it projected in cinemas. The restoration team has done amazing work, and these moments of degradation are absolutely acceptable.

Incredibly, the film opens with an animated title sequence. This in and of itself is remarkable, and feels years ahead of its time. It’s a clear signal that this film may be different.

Unfortunately, after whetting our appetite for visual experimentation, there is no more animation to come in the following hours. It would have been quite pleasant to have little animated sequences marking transitions throughout, or even some recall of the technique at the end. Alas, it’s not to be.

We can live with this, however, because Prager has included thoughtful title cards throughout the entire film. In Dutch, with subtitles (thank you, Criterion), these are far superior to the Luce titles, which were sparing in detail and overzealous in pace. Prager’s titles linger long enough for the viewer to actually read them—and process what’s being said—and in many cases include a sequence of multiple cards to convey additional information about what we’re about to see.

Another point in Prager’s favor is the consistency of these titles’ insertion into the action. In nearly every case it’s far more clear whether the text is referring to something we’re about to see, or something that just happened. I cannot say this for the Luce’s comparatively lazy infodump. Here’s an example of a useful title card preparing the viewer for what’s coming in the awards ceremony at the end of the film:

The most dramatic and effective usage of on-screen text in Prager’s piece occurs in several of the men’s races at Amsterdam’s Olympisch Stadion (and yes, the stadium still stands, is still in use, and you should visit it if you’re ever in Amsterdam!). Here the titles operate as a modern on-air commentator does, telling the viewer what’s happening as it’s shown. The masterstroke is the imposition of this text onto the moving pictures. It’s so effective, and so unexpected after watching the Luce film, that’s it’s practically shocking.

I wish the rest of the film operated that way but I’m sure this was quite an effort, like the opening animation, and serves as something of an experiment. Despite limited deployment, it’s a resounding success, and builds on the technical excellence of the Italian crew’s camerawork. It’s an early look at what would become an indispensable technique.

A moment in the 10,000, where the field takes a corner in what is clearly not a segment from the Luce print suggests this imposition is indeed from the original film, though most of the pristine title cards throughout appear to be modern reconstructions.

In addition to the title card approach, the sequence of events in this film is different, though in most cases that’s immaterial. More of the crowd is shown here, and there’s a particular eye for the Dutch royalty. Both of these are especially evident at the equestrian event. After dressage at Hilversum the action shifts to the Olympic Stadium for team eventing. A slow, dramatic pan of the stadium serves as an establishing shot, and it’s breathtaking. Then we’re treated to action interspersed with peeks at the royal box as Queen Wilhelmina looks on.

Speaking of the Queen, remember that segment where she disembarks from her carriage outside the stadium and snubs the Prince Consort? Luce shows that happening at the end, before the Closing Ceremony. In UFA’s version she has returned from holiday in Norway to attend the really weird gymnastics segment, which is in the first half of the film.

We’ve seen pretty much all of this before, but virtually everything is trimmed down from the all-you-can-eat buffet of the first one, and we, the viewers, are very grateful.

This economical approach (let’s be clear, it’s still over three hours long) allows for a bit more appreciation of some special moments. Comprehensive marathon coverage includes some great vehicle-mounted imagery, including a shot of Boughera El Ouafi that looks like it belongs in Kon Ichikawa’s Tokyo film. Along the rowing course reeds blow in the breeze and spectators run along with the boats, the Dutch landscape beyond.

Sailing follows, and though it’s impenetrable (despite titles insisting otherwise) we are treated to some lovely upper-crust spectating. The musical score here is serene and complex, and ever-thoughtful title cards report the results using the boats’ sail numbers, which is a nice little educational offering.

And then, after fencing, a big moment: cycling! Ah, the cycling events! We can surely expect a thrilling scene in The Netherlands for the Olympic event, rivaling a Norwegian speed skating crowd, right?

The title card elevates the pulse and the viewer sits up in anticipation, and the payoff comes … and it’s a single still photo of the Dutch gold-medal track tandem team, Bernhard Leene and Daan van Dijk.

LW: Two thumbs down on this one. We’re big cycling fans.

DW: What a letdown! Just as the animated opening raised expectations and then vanished, cycling is not to be seen again.

The cycling travesty is about the only negative thing I can say about this second Amsterdam film. Relative to the first one, it’s absolutely superior. From animation to superimposed imposed titling to effective use of slow motion, it set a new bar for Olympic film.

If you want to see what happened at Amsterdam 1928, watch this one. You’ll see fewer javelin throws, but you’ll better understand what’s going on.

Below is the Olympic Channel’s Amsterdam 1928 playlist. Note these videos are not from the Criterion restoration, but you can see some of the events we discuss in this and the Luce post.