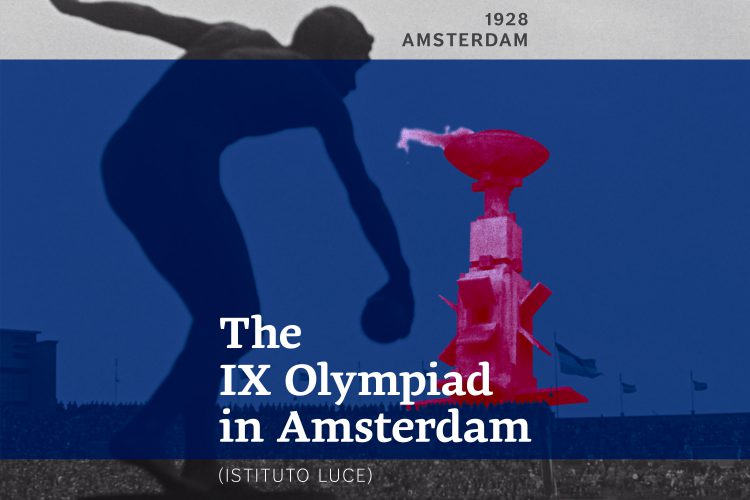 The IX Olympiad in Amsterdam // AMSTERDAM 1928

This week we’re discussing The IX Olympiad in Amsterdam, the film of the 1928 Amsterdam Olympic Games. This is actually one of two official films produced. Without getting too deep into the details, this film was produced by the Italian film company Istituto Luce, then under the control of the Fascist state. The awarding of this contract upset a whole lot of people, and so UFA of Germany was tasked with recutting Luce’s footage and producing a separate film.

The Italian version is this week’s subject. Our next piece will discuss the German version, which is quite a bit different despite using much of this footage.

What is an Olympic Film?

We have become accustomed to a certain format over the past 35 years, thanks in large part to Bud Greenspan. But in the beginning of the 20th Century, when the Games—and film itself—were still new, there were some other ideas and purposes in play.

After slogging our way through over four hours of silent film (accompanied by only a solo piano score) it’s clear the purpose of an Olympic Film has changed dramatically in a hundred years. Today events are televised in every nation and available for replay on demand, so a film is meant more for storytelling than event coverage.

In 1928, the only place for most people to see Olympic events would have been cinemas. As such, this particular film takes the approach of showing as much of the action as possible, broken into 13 parts. Presumably cinemas could then show each part separately. 20-minute episodes are certainly a preferable way to watch this film.

DW: I wish we had! That would have been a good idea, because the full film ends up feeling like a purely academic archival record, the camera and director a neutral conduit. The destination of the film appears to be a research library rather than a public exhibition, or an in-home viewing (certainly inconceivable in 1928).

It also relies on narration by way of titles that are often too rapidly disposed of and inconsistently sequenced. This makes it quite difficult to really follow along with who’s who and what’s happening on screen. Watching this with a printed program of events handy would make it far more accessible.

LW: As some sports have changed so dramatically, sometimes it was hard to know what you were watching if your attention drifted and you missed the title. (Not that this happened.)

DW: No, never! But if it had, you would have been forgiven, because those Italian title cards whipped by before we had a chance to read the subtitles.

While this longest piece in the collection is a grueling ultramarathon, not really suited to watching so much as studying, it’s a phenomenal resource for full event video in many cases. It’s also neat look at the state of sport in the 1920s.

The Amsterdam Games took place in the summer of 1928, 11 years after the end of the First World War and 11 years before the start of the Second. The trappings of the old order were still visible: colonial flags flew proudly and the Netherlands’ Duke Henry of Mecklenburg-Schwerin, Prince Consort to Queen Wilhelmina, opened the event. (The Queen was on holiday at the time, though she makes a memorable fur-bedecked appearance at the Closing Ceremony.) Meanwhile, the Japanese team wore the Rising Sun on their uniforms.

LW: Watching the Queen was my favorite part of the entire film. Her interaction with the Prince Consort was fascinating! I’m not sure she even liked him.

DW: Uh, I think you may be correct, and it seems she had cause, but that’s another subject for another time….

Amsterdam also hosted the very first Olympic flame! This is noted with a single shot of the Marathon Tower, but is not explicitly mentioned. In retrospect this seems an oversight, but at the time it was probably more of a novelty than the pseudo-religious rite it is now.

In four-plus hours there are bound to be some notable events and athlete appearances, assuming you’re alert and ready for them. A viewer with sharp eyes will see the last Olympic races of the great Flying Finn, Paavo Nurmi, as he duels with countryman Ville Ritola in the 5,000 and 10,000, and takes silver in the steeplechase.

A couple of interesting athletes have victories: Lord Burghley (GBR), famously fictionalized as “Lord Lindsay” in Chariots of Fire, eases through a semifinal and then puts the hammer down to capture the 400 meter hurdles gold that eluded him in Paris; and the 16-year-old out-of-nowhere Betty Robinson (USA) takes the 100 meters with a lean at the line. Robinson was a focus of Roseanne Montillo’s terrific Fire on the Track (B&N | Apple Books), an accounting of women athletes in the early 20th century.

Gymnastics is given a hefty segment, though with unfortunately confusing coverage. Bouncing between teams and disciplines, it’s challenging to know what’s being shown or what the format was. This is especially disorienting today since the sport has changed dramatically in 90 years.

LW: Totally agree. I really wish I could have understood what was going on here.

DW: In aquatics, several water polo matches are shown with some raucous crowd reactions, and the swimming relays have similarly enthusiastic support on the pool deck (though the races themselves are really difficult to follow). The temporary Swim Stadium was a pretty lively venue, with Tarzan himself, Johnny Weissmuller, picking up the last two of his five Olympic golds.

The equestrian event has some hilarious musical timing thanks to the piano score specially composed for the Criterion release. Let’s just say horses are adorable with piano.

Criterion’s restoration of the video is astonishing and has absolutely revitalized the imagery. Some sunlit scenes are so sharp and crisp that they could almost pass for modern digital photography.

A still from the clip of Robinson’s 100-meter victory as available on the IOC’s Youtube channel:

The exact same frame, as seen in Criterion’s Blu-ray restoration:

There are some neat cinematography notes to report. The Italian crew did some really interesting work on the javelin & high jump competitions, with multiple unexpected angles. The javelin coverage is almost an experimental film; the camera crew clearly just tried out a whole bunch of things. There is great slow-motion action in multiple events—athletes’ muscles flex in smooth motion that resembles modern digital frame rates. On the track a swiveling camera is used for longer events as the race unfolds all the way around the track. This allows for an excellent record of the actual competition. Film-speed limitations of the day made the sprints into a flurry of blurred limbs. It’s a neat, unintentional effect.

Later on there’s a vehicle-mounted camera for great coverage of rowing events, a great variety of interesting angles at the aquatics venue, and even some neat looks at fencing.

Overall this huge film represents an excellent archival resource. I expect anyone researching athletes, sports, or social matters of the age will be able to find plenty of useful material. However, even in 20-minute segments, I think it’ll be difficult for the casual viewer to find much to latch onto. With research and targeted viewing, it’s really rewarding to watch Ritola surge away from Nurmi in the 5,000 meters. Without that background, it’s one more moment of guessing what event & athletes are onscreen before the long parade of effort marches on, suddenly, to another event, and another sip of Advocaat.