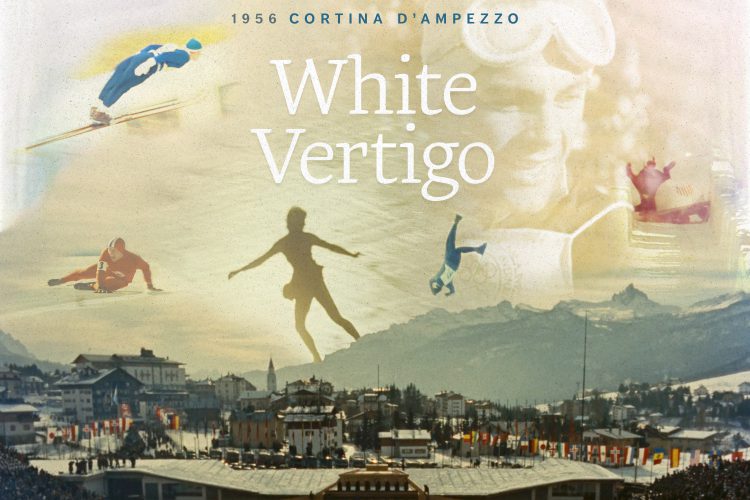 The VII Olympic Winter Games at Cortina d’Ampezzo occupy a fascinating moment in the 20th Century. Postwar optimism and prosperity offered an opportunity for a lavish event, but without the bulging scale that would come later. There were a slew of firsts here: this was the first Winter Games under the now-controversial presidency of Avery Brundage, the first winter appearance of the Soviet Union, the first appearance of the IOC’s compromise United Germany (FRG/GDR) team, and the first triple victory by an alpine skier (Toni Sailer, AUT).

White Vertigo, directed by Giorgio Ferroni, is the film of these Games, and at a trim 96 minutes, it’s highly watchable with narration in entertainingly effusive Italian (with English subtitles available on Criterion’s release). Reds and blues are wonderfully saturated throughout.

LW: I’m going to chime in before Don gets too poetic. The opening of the film felt just like an older live-action Disney film and it brought me such joy to watch. (I immediately thought of Escape to Witch Mountain when it started up, which was my absolute favorite movie when I was little.) I’m not sure how any of the others will top it!

DW: I agree, Liz. It immediately set a lovely, warm tone for the rest of the film, totally unexpected and, honestly, kind of oddball.

In the following segment on the Opening Ceremony in the breathtaking Stadio Olimpico del Ghiaccio (Olympic Ice Stadium), we get a great look at the color preserved in this film. The bright scarlet of the Soviet banner and Italian parade uniforms in their vibrant blue, all against the rich wooden backdrop of the stadium, glow brightly in Cortina’s golden hour light.

LW: Also, the Alps—is there a more breathtaking sight in the world?

DW: The film presents some interesting techniques throughout. Right off the bat we see an exciting intercutting of the women’s downhill and the four-man bobsled. The speedskating/figure skating combo segment is all about contrasts in speed and style, with different musical treatments for each event.

Possibly the most clever presentation of figure skating I’ve ever seen uses inverted frames to let the crisp shadows of the athletes be the subject. This is only possible due to the sunlit outdoor setting, and it’s really lovely!

An amusing vignette of a weather-worn Italian craftsman caressing a sled’s runners opens the two-man bobsled coverage. It recalls the opening village snowstorm mini-drama in tone: warm, quiet, intimate interiors full of wonder and care. The race coverage itself is excellent and exciting, but it’s this unique introduction that is so in keeping with the message of the film.

Like we saw with the decathlon in 16 Days of Glory, longer events really do seem to translate well to film. Sixten Jernberg‘s (SWE) triumph in the men’s 50km cross country is a standout. Mobile cameras follow the racers through the rugged course, with tight focus and a dramatic score that builds to a crescendo at the finish line.

LW: While we’re talking style, let’s discuss ski jumping. While I find modern day ski jumping events fun to watch, I can never really see the difference in styles or techniques between competitors. But in the Cortina film, there were a wide variety of styles used by the athletes and it made this part of the film a joy to watch.

DW: Act II pivots to a look at daily life in the Village, with focus on varying national cuisines and routines. The Finns hang out in the sauna, the Soviets are the champions of eating. Spectators and athletes alike ride adorable Fiats, horse drawn sleighs, rail, and gondolas, all with international fraternization aboard.

LW: I loved this look into the lives of the athletes as well, such a well-placed touch to add a human element to the games. It was interesting to see it focused broadly on national traditions, rather than the more traditional single-athlete focus used currently. Also, again, the cinematography was top notch in this film.

DW: Evening vignettes of relaxing athletes give way to medal ceremonies and ice hockey under the lights at the Ice Stadium. A totally unexpected jazz piano and some unexpected wipe cuts add energy to the frenzied action on the ice. This look at the round-robin tournament runs pretty long, but the visual treatments are exciting.

The film periodically checks in on the men’s alpine events. Here we meet the literal poster boy of the film (aside from Cortina itself), the 21-year-old Austrian triple gold medalist, Toni Sailer, and subject of gushing narration. He doesn’t just round slalom gates, he makes his way down the course while “dancing a waltz.” Sailer even gets his own musical theme, with harps and vocalists singing “wom, wom, wom, wom” in ascending notes whenever he appears!

The men’s downhill is great fun to watch. Sailer wins, but the filmmakers do a masterful job using the danger of the Rumerlo section of the course to build tension. The viewer can’t help rooting hard for each racer to get through unscathed, and it makes for terrific theater.

The film ends in the usual fashion, with a somber Closing Ceremony, and implied reflections on the 11 days of festivities, followed by a completely bonkers high-speed fireworks display you simply have to see.

LW: Don is understating things here—the fireworks display was terrifying! Fireworks were shooting off in all directions, one right after the other, and I don’t know how no one died. I’m hoping this was simply a film editing choice (perhaps they sped up the film?), and not what actually happened. I almost had a heart attack.

DW: Yeah, it definitely seemed sped-up. Good heavens, I sure hope that was the case!

White Vertigo is a look at contrasts in sport, and an exercise in the optimistic ideals of Olympism. Throughout we are reminded of the humanity of those involved, whether athlete, official, or spectator, while marveling at the speed and technical capabilities involved in sport.

In retrospect it’s a little odd that the combined German team isn’t called out in the film (this is the first appearance of athletes from the East since before World War II), or that the Soviets’ first winter Games isn’t explicitly noted (the team does get a little longer look during the parade of athletes).

As the conflicts which would lead to boycotts of the 1956 Melbourne Games later that year hadn’t yet occurred, this film represents a sunny moment in Olympic history, when so much seemed possible.

Ultimately, one of the aims of the Olympic Movement is to be a respite from conflict and to provide an arena for international friendship and shared humanity. In reaching for this goal, White Vertigo succeeds. It is a beautiful time capsule of a hopeful moment in the Italian alps.

For more images from White Vertigo, check out this great Twitter thread from Criterion.

WHITE VERTIGO (Cortina d’Ampezzo 1956), directed by Giorgio Ferroni, is one of the unexpected jewels of this Olympic films collection. pic.twitter.com/ByDTETpNiR